Share All sharing options for: The Frightening Super Powers of Seattle Offside Poetry 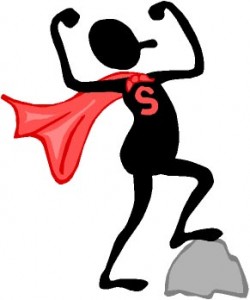 Okay, so you know in various comic books and TV shows about super powers, where the hero/heroine doesn't know the full strength of his/her powers and accidentally kills people all over the place before he/she learns to channel things in the correct fashion?

Because you know my Sounders poetry? It seems to have had unintended consequences.

I realized this last week, when I wrote a poem about Kasey Keller, only to have him get sent off with his first red card in what, seventeen years?

And then I started to think about the previous week, when I wrote about Fredy Montero, Freddie Ljungberg, and Sebastien Le Toux. And within a couple of days of the poem, Fredy is asked to surrender his passport, and Freddie goes down with a (thankfully not too serious) knee injury. Only Seba seems to have had the power to resist. (Unless you count the fact that he was the one chosen to come off last week to bring on Dragavon. Which I think I will, because the alternative is to imagine that my poetry is a malevolent force just hovering over his head, waiting to strike. And I don't think I could live with myself if that were the case.)

And at first I'm thinking, "Oh, it couldn't be me. I used to write Galaxy poetry all the time, and nothing ever..."

Oh, crap. Their last two seasons were entirely my fault, weren't they?

But that was then. This is now. No sense looking back; we must now look to the future. And what does this mean, oh fans of Seattle Sounders FC?

It means that from this day forward, I will choose to use my powers only for good. From here on out, I shall write only about the opponents we will be facing.

P.S. All right, I know he already cut it. But he says he misses his long hair and is growing it back, so the sentiment holds.

You took on David Beckham
(And truly, we're all glad)
But Seattle's undies model
will make you scream for dad

The poem written for
Chivas goalkeeper
Zach Thornton, who is
(oh, how can we phrase this delicately)
A Big Guy

Now I'm just hoping that the specifics of my super powers don't require me to say positive things about somebody in order to cause bad things to happen.

(Hey, sometimes these things take awhile to sort out, okay?)