Share All sharing options for: Outgunned and Out-Scouted: Those Post-Game, Post-Loss Thoughts 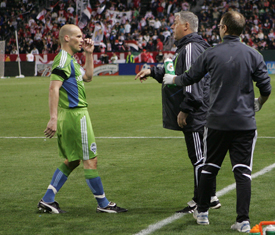 So. Yeah. About that game.

Also, don’t underestimate the impact on these last two games of having a good keeper at the back, instead of the best keeper your country has ever produced. Keller was earning his first cap for the national team when Eylander and Dragavon were six. He was playing on World Cup squads and in international matches against the likes of Brazil when our younger keepers were learning to spell. In fact, around the time Eylander and Dragavon were finishing middle school, Keller shut out Brazil in the 1998 Gold Cup semifinal, leading Romario, a World Cup winning striker, to call it the best goalkeeping performance he’d ever seen.

So, to me it’s not a coincidence that we give up our first goals when Keller’s not in the nets. It’s not just that he’s a great keeper, that he’s got superior positional sense, and great decision making skills (most of the time). All those things are true, but Keller is a leader, someone who gives the rest of the players confidence that they can take some risks and still be okay. That sort of spirit affects not just the defense, but the whole team. Riley may have scored an own goal this time out, but a couple weeks ago against Toronto he had an inspired sequence where he used some beautiful control and deft passing to launch Ljungberg down the sideline. That was followed up by Freddie touching the ball to Seba, who centered it, where Jaqua one timed it, and the ball shot out to where Zakuani could slot it home. Riley knew he could come out and contribute to the offense because the guys behind him were comfortable and confident in their ability to handle the Toronto attack. And they were confident in that ability because they knew what got by them would probably be stopped by Keller. Expect the performance to improve next week when Keller returns.

So...yeah. Disappointing, definitely. But still. Nine points in five games isn't all that bad for an expansion team.

Now let's take out San Jose at the knees.