Share All sharing options for: Uh-oh. Fredy Montero to Miss the Toronto Game? 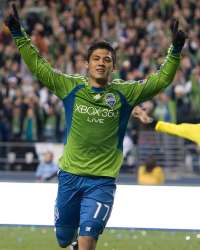 This is not good.

The PI (online version, of course, given that that's all there is these days) is reporting that our wonderkid and MLS player of the month Fredy "How the Hell Did We Get Him" Montero did not catch the plane to Toronto with the rest of the team.

New Sounders FC sensation Fredy Montero didn't make the flight to Toronto with his teammates Thursday and may miss the franchise's road debut due to illness, a team spokesman said.

If Montero's condition improves, he could rejoin the team Friday, but that remains up in the air. Montero left practice early on Wednesday and was still not feeling well enough to fly when the team departed.

(Although it would also kind of keep a bad result in the second-most hardcore stadium in the league from affecting our spot as America's favorite team, wouldn't it? Not that that's a possibility.)