Share All sharing options for: An Unsubstantiated Beckham Rumor Swiped From My Second-Favorite Guilty Pleasure Site 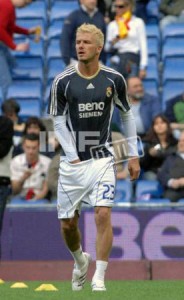 "Whew. They're still golden." (Because you just have to check every once in awhile.)

So. Yeah. Beckham. This was posted over on my second favorite* guilty pleasure site, MLS Rumors.

I seldom come across anything rumor worthy, and this may not even qualify, but I figured I'd let you guys decide. I was in Vegas earlier this week playing poker at the Venetian. The man sitting next to me was well-dressed, and had an MLS pin on his suit lapel. When I asked if he was a fan, he said he was an MLS executive. We discussed this and that about the league, and when I brought up Beckham, he said that Beckham's permanent departure to AC Milan at the end of the '09 season is far from a foregone conclusion. The league feels it has a good shot at enticing Beckham to stay. He also said a friendly is in the works between LA and Seattle, as the league really wants to get Beckham to play at Qwest.

For me, the comments were even more entertaining than the rumor, so be sure to stop by the site and read them.

a) Do you think Beckham might lower himself to honor us with a friendly? and
b) Do we care?

*Oh, come on. We all know that #1 Guilty Pleasure is Kickette.

P.S. My brother-in-blog Travis has a DC United "You Write the Caption" photo up over at MLS Offside. Stop by and join in the fun.