There is nothing big enough going on today to create a whole post out of. Plus I'm suffering from a serious case of Spring Fever and the Humpday Doldrums.

(Pretty sure that's an officially-recognized medical diagnosis. Feel free to try it on your boss: "I'm sorry, sir. I can't come in today. Doctor says I've got Humpday Doldrums. Worst case he's ever seen. Yes, hugely contagious. Best treatment is to curl up under a blanket with the France-Brazil video from the 2006 World Cup.")

Pretty sure that would work.

But. Since I am unmotivated, allow me to direct you to a few fun items from others:

Apparently Brad Evans has the media department to blame for his "Soccer Hottie" status. From the News Tribune:

Asked Tuesday about his selection, Evans initially said he was randomly selected. But actually, he was chosen by the Sounders’ media-relations department after each of the league’s 15 teams was asked to select one good-looking young player from its roster.

Let this be a lesson to you, Brad. There are consequences to not sucking up to your media relations department. I'll bet Patrick Ianni and Steve Zakuani sent them flowers, and you don't see them on the list, do you?

Speaking of Sounders Eye Candy (David Falk's words, not mine, thankyouverymuch), Nate Jaqua leapt out to an early lead in Seattle Soccer Examiner's "Vote for Eye Candy" poll, but he has recently been overtaken by Roger Levesque. Which I'm pretty sure means USL Sounder trumps Oregon native, but -- given the fact that one can vote multiple times for the same player -- it could just mean that Roger spent some quality time with his computer last night.

(And by that I mean: just kidding, Roger!)

And Jose Romero over at the Seattle Times blog has a photographic answer to the question that's been keeping us up nights: What does Freddie Ljungberg's dog look like?

The answer would be: This. 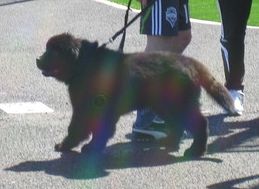 She's a Newfie. Expect her to outweigh Freddie in five...four...three...

Click on the link for details on the 1-1 Reserve game against UW. (Also, video, here.) In short, many chances, couldn't score. Are we seeing a pattern here? I hope not.

And finally, we're offically a month old! Well, technically a month and three days, but color me slow this week. (Remember, I am officially disabled by Humpday Doldrums. So cut me some slack.) 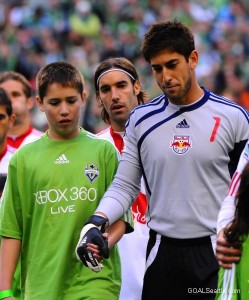 My point, though, is that GOALSeattle has an unbelievable scrapbook/photo retrospective that anybody who loves this team is going to want to see. Hundreds of photos from the opening game, like this one of Red Bulls' own "hottie," Danny Cepero. (Photo by Rick Morrison?)

So if you have a few minutes to a few hours to kill, stop by and take a look. You won't be sorry.