Share All sharing options for: Meet Adrienne, Seattle Offside's Fan of the Week! 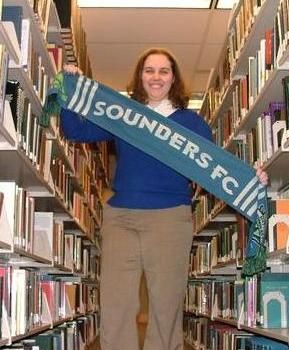 It's that time again! You know. Fan of the Week time!

And with that, let's meet our newest Fan of the Week, Adrienne!

History of the fandom:

I got excited about soccer after visiting England in 2004. I didn’t get to go to any games in England, but I did go to Highbury in London. The day I went was when they were showing off the Premiereship Trophy Arsenal had won (for the 2003-2004 "Invincibles" season), so there were a lot of fans around. And I really got the feeling that they were true supporters who felt the same way about Arsenal as I feel about the Mariners, and that was when football/soccer stopped being a foreign sport to me.

Arsenal became my Premiereship team, but I didn’t follow soccer in the US, because we didn’t have a major league team in Seattle, and rooting for (sorry, supporting – still a bit new to this) some team in another city just seems wrong. But once Seattle got an MLS team, I was on board. I was at the George and Dragon pub when Drew Carey made the big announcement in February ’08, and I was at the Opening Match against New York on March 19th. In between, I wore my Sounders scarf and read as much as I could about soccer and about the Sounders.

As far as a favorite player goes, I don’t really have one at the moment, mostly because they are all so awesome. I have a “maternal area” like you do – I want each of them to continue to succeed and be even more awesome. I guess I cheer particularly hard for Freddie Ljungberg (remember: Arsenal supporter) and the more I read about and see Steve Zakuani play, the more I like him. But I know that the midfielders and defenders are huge, and Sebastien Le Toux is incredible with how fast he is, and I love Sanna Nyassi’s smile, and…yeah, I can’t pick just one.

I’ve been the most impressed with the atmosphere at Qwest Field for Sounders matches. That’s become kind of a cliché, but both the home games have been fantastic and loud. I’ve been to several Seahawks games, and lots of Mariners games, and they just don’t compare.

When ECS started the Wear Your Sounders Scarf to Work Day, I was bummed because they set it for Fridays, and I don’t work on Fridays. So I wore my scarf to work on Thursday instead. That’s me rocking it in the picture. I work at a library, which is great because it keeps me quiet all week so my voice is ready for match day.

On the female fan experience:

I don’t know many other female soccer fans. I don’t feel like I’m any more or less of a Sounders fan than the guy wearing the green jersey in the stands next to me (not my husband, the guy on the other side). I do think that there are quite a few knowledgeable female soccer supporters who are concerned with more than just who the hottest Sounder is, and I fall into that category. I want to think about things like formations and matchups more than which Freddie/Fredy is cuter. (On the other hand, I also paint my toenails Rave Green. So there’s that. And for the record, I think Ljungberg is cuter.) I’m not the most knowledgeable supporter yet, I’m still fairly new to this. But I’m in it for the long haul, Sounders ‘til I die, and as long as I’ve got that and a willingness to learn about soccer, I don’t see how any other true fan, male or female, can think that I am not a true supporter. And now I will step down off my soap box.

If you could chat with the guys before Saturday's match, what would you say?

Holy Crap, I’m in the same room as the Sounders!

Gentlemen, you are professional soccer players, and we the fans understand that sometimes you’ll have a match where you’re not playing at your best. But we also want you to keep working hard and displaying your skills. As long as you do that, we’re here for you. Now get out there and play your game. Go Sounders!

Nothing for me to add to that! Go Sounders!

And now, Adrienne, here's the reward for being so patient as I took my sweet time in putting this post together. Your Utterly Official Seattle Offside Fan of the Week Certificate. Click to enlarge to, y'know, printable size. 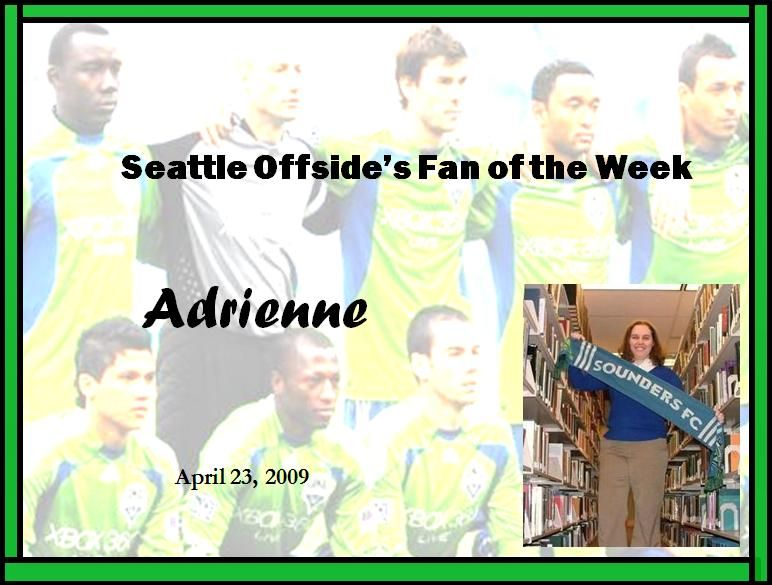 (HUGE thanks to photographer Rick Morrison and GOALSeattle's David Falk for allowing me to use and abuse the background photo. You guys are awesome. And now I of course can't find the exact link that would take you to the photo. So just go to this site and spend lots of time there. You won't be sorry.)

If you'd like to be Seattle Offside's Fan of the Week, drop me a note (preferably with a photo) telling me about your love for the Sounders and why you belong on this page. laurie[at]theoffside[dot]com.