Share All sharing options for: My Not-Much-of-a-Preview for San Jose (and Why You Should Use Me as a Wikipedia Source for "Nuclear Physics") 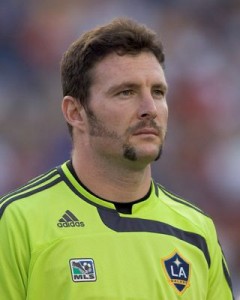 So. San Jose tomorrow, in a match that is officially not part of the Heritage Cup -- the matchup of old NASL rivals.

(Because reasonable people may disagree over which team has actually won an MLS Cup, but nobody can take away San Jose's NASL heritage, dammit!)

And for the record, Wikipedia tells us that the Heritage Cup page has "multiple issues." I have no idea why that makes me giggle, but if you're a Heritage Cup fan, feel free to go in and fix the problems.

(And be sure to randomly use this page as a reference, because I'd love to be able to temporarily pretend that I'm a "reliable source." Actually, that goes for any Wikipedia page. I think I should be a source for everything from Nuclear Physics to Godwin's Law.

But anyhoo. San Jose. Return of Bobby Convey to the US. Return of former USL Sounder Cam Weaver to the US. Sieve-like defense which has given up eight goals in four games. And Joe Cannon.

Love Joe Cannon. By which I mean: I love Joe Cannon. By which I mean, "back when Beckham came into LA and all team chemistry was destroyed and everybody was miserable, Joe Cannon was the guy I worried about most." Seriously, toward the end of the season he started looking mental. I kept getting visions of our Joe, sitting home alone in the dark, tumbler of whiskey in his hand, muttering, "Keeper of the Year. I was effing Keeper of the Year."

(Need proof of his mental state? Look no further than the facial hair in the above photo.)

And I feel comfortable confessing this love for Joe without feeling emotionally torn because...hell. Did I mention his team has given up eight goals this year?

But now he's in San Jose with coach Frank Yallop. Whom I also love, and who also survived hell in LA before being unceremoniously dumped, after which he was finally shown the love by San Jose.

My favorite Yallop story (because you know you were wondering) comes from the SuperLiga. Which LA totally qualified for with no special Beckham-related help from MLS. Or anything. And despite major sucking in league matches, they actually made it to the final, and through the ninety minutes, and through extra time before finally going out on penalties. It was at this point that the mild-mannered Yallop finally spoke his mind in what I'll always consider the “Best Post-Game Speech Ever In History.”

“I’m really proud of the way our guys came out because of all the crap we’ve been f—— through,” Yallop said. “I’m telling you, it’s been difficult to f—— deal with. I’m sorry to swear, but it’s been hard. But they kept going, and that makes me proud. That’s all I can say.”

Um...yeah. Maybe you had to be there.

But that's all I've got to say about the game. (Because somebody's gotta fill your head with trivial tidbits.)

Except I must say that I'm fairly certain our boys can do this, especially with Kasey back in goal.

(But to make it work, I'm pretty sure you'll first need to go in an make me a "reliable source" on nuclear physics.)