Meet Our Seattle Offside Fan of the Week: Mandy (Yes, THAT Mandy)

Share All sharing options for: Meet Our Seattle Offside Fan of the Week: Mandy (Yes, THAT Mandy) 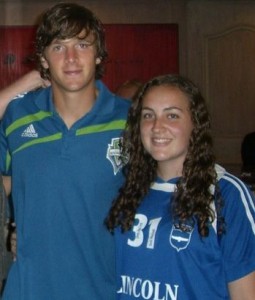 So one week you're a normal, soccer-playing student living in Argentina. Then you write a song, meet the Sounders, post a video... And at that point all hell breaks loose.

I think that pretty much describes the last month for our latest Fan of the Week, Mandy. Mentions on a couple of national blogs, on numerous local blogs (including an entire post from our very own Taylor Graham, who has made it his personal mission to get her video 20,000 pageviews), and even a brief, anonymous mention on Fox Soccer.

And all because one day, for fun, she wrote a song about Sounders FC rookie Evan Brown.

So what's the story behind the song? How old is she, exactly? And what about the now-infamous "jailbait" line?

I'll let Mandy tell you in her own words.

But first, once again, the video. Please watch it (or watch it again) and send it to your friends. Help Taylor reach his goal.

First, the burning question everybody wants to know after listening to the song: For the record, how old are you, exactly?
I am 17 years old, but I will be “legal” in September. =]

Walk us through the thought processes that led to the song. Where did it come from?
What pretty much happened was that my dad told me that I was going to get to meet the Sounders, and at the moment I really felt like writing a song. I decided to write one for someone on the team, so I went and checked out the Sounders roster and looked up names that I could use in a song. Evan happened to be one of my favorite players anyways before the song, but I specifically liked how his name and bio fit for the song itself. That’s pretty much how I chose to write it for him. Don’t get me wrong though, he is definitely one of my favorites.

What everybody probably wants to know, and what everybody but me is afraid to ask: the jailbait line (which was hysterical, btw.) Were you worried that it would be taken the wrong way? Any negative feedback or repercussions? Have your parents heard the song?
At first I wasn’t going to include the jailbait line. I wrote the song at school in classes and before my soccer practice; and I was thinking up verses with a friend when that line came to mind. I said it out loud and we just laughed about it, but I didn’t think of writing it down because I knew it could be taken the wrong way. After a few minutes though, I took the piece of paper with the lyrics out again and wrote it at the bottom as a “ps” for Evan. It happens to be one of my favorite lines though, so I included it in the song on YouTube.

At first I wasn’t sure how the team/Evan were going to take the song and I was pretty nervous, but luckily most people see it as a humorous gesture and they don’t hold it against me. My parents have heard the song actually. They didn’t find out that I wrote/gave it to Evan until after I got back into the car from meeting the team though. My dad wanted to kill me when I told him about the lyrics (especially the jailbait line haha). They are very supportive about it though, and they are pretty shocked, but happy, at the responses I've gotten.

How did you end up in Argentina, and how did you connect with the Sounders team when they visited? Any other Sounders fans down there?
I was born in Argentina because of my parents’ job, so I’ve just kind of grown up here. My dad is the one that got in contact with the team and he just asked if we could go to their hotel and meet them, which they agreed to. It was pretty cool because it is pretty much just me and like three other students at my school that are fans, so they really liked seeing supporters in another country. Plus, the team gave us (me and the friend who went with me) free necklaces with the Sounders logo on them, which made the whole experience even better!

What was the reaction from Evan and the rest of the team when you gave him the song?
When I gave Evan the song I was pretty embarrassed and wasn’t able to really pay attention to what was going on around me. Evan said thanks and a few of the teammates that were there at the moment started joking around saying, “aww Evans got a song!” Then right before I left, Taylor asked me to sing it in front of the whole team, but I said no. I was too nervous, plus I didn’t have my guitar with me.

Taylor Graham devoted an entire blog post to your song and has made it his personal goal to get your YouTube video 20,000 views. Have you heard directly from him or any of the Sounders since you posted the video?
I haven’t heard directly from any of the Sounders, just the blog and youtube comments from friends of Evan. I’m happy enough with the blog though; that was awesome of Taylor to do, and I freaked out when I read it.

From what I've seen, the reaction to the video and song have been very positive. Agree, or are there some reactions I haven't seen? How have family, friends and strangers reacted?
Most of the reactions have been very positive, and I want to say thank you to everyone that has responded kindly. Of course there has been one or two blogs going around hating on the song, but those aren’t worth complaining over when you’ve got a full blog post by Taylor Graham… That’s how I see it at least. =)

My family thinks that all the responses have been awesome and they find the whole situation pretty hilarious. It’s the same way with my friends; they are all just really excited about it. Honestly, none of us expected it to get any views from the team or Evan, and even less from complete strangers in Seattle.

Did you expect it to get as big as it has?
No! I wasn’t expecting this AT ALL! I didn’t even think Evan would watch it, because honestly I would be freaked out if a random fan handed me a song in a foreign country during preseason hahaha. The response has definitely been amazing though.

Any plans for a follow-up song?
I wasn’t really thinking about doing any, but I’ve gotten several requests. Who knows? If I do write more songs for the Sounders my “victims” will either be Taylor (I need to say thanks in some way), Patrick Ianni, or Nate Jacqua (quite a few asked for a song about him). Maybe I should just write one for the team as a whole, then that would solve the problem on trying to choose another player.

What's next for you?
I am going to be in Seattle for a week this summer and ill luckily get the chance to go to my first Sounders game on July 25. I am very excited. Other than that, I don’t have anything planned for now… I am just going to go along with whatever happens.