Golden Boot Standings (No, We're Not Represented. And This Isn't a Bad Thing.)

Share All sharing options for: Golden Boot Standings (No, We're Not Represented. And This Isn't a Bad Thing.) 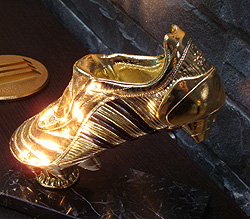 I was over at the official MLS site today, looking at the Golden Boot standings after Week 6. We are not represented in the top six -- i.e. the ones who show up on the MLSnet main page. (Bottom right sidebar.)

Those current top six are:

In other words, nobody from Seattle.

I'm thinking, though, that the fact that we don't have anybody on the list is not a bad thing. Chivas, at the top of the imaginary single table, are not represented either. On the other hand, Dallas and LA are in the cellar of the West, and there they are with Kenny Cooper and Landon Donovan.

What our team has instead is nine goals scored by five players.

What this means is that, statistically speaking, the chances of our goal-scoring being disproportionately affected by things like injuries or international callups to one key player are a lot less. And that's not a bad thing.

But it would still be kind of fun to see our players represented on the list. Steve Zakuani and/or Fredy Montero, I'm pretty sure I'm lookin' at you!

(Full table with goals and assists is here. Fredy Montero is in tenth with three goals and one assist. From what I've read, first tiebreak is assists, second is goals per minutes played. I'm just going to take their word that this is tallied accurately and not question why somebody with the same number of goals and assists who's played five games is listed below two others who've played six.)