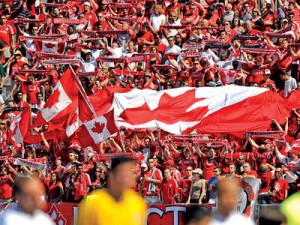 Jose Romero over at the Times (who is in Toronto) is reporting that Freddie Ljungberg will be starting tomorrow, up front, with Nate Jaqua. Very curious to see how that works out. I also read somewhere else (can't remember where) that Sigi thinks Freddie is up to maybe seventy minutes for this game.

As expected, the other Fredy did not make the trip. Two more comments about that, then I'm done till something official happens.

1) The stalking charges were apparently unfounded, and the sexual assault charges have been referred to the prosecutors for review. None of which means anything, one way or another, without more information.

I haven't seen anything else about a change in lineup, so I'm guessing that outside of the Freddie-for-Fredy swap, we'll see the same starters we saw last week.

"GS-1" over at the Seattle Soccer Talk forums (that's just a general link, 'cause I can't remember which thread I read it in) pointed out that the team has, in fact, played a game without Montero, and that game was the preseason 1-0 loss to Colorado. But in that game we had Stephen King rather than Freddie Ljungberg, plus the team hadn't had as much time to jell, so we'll see if that makes a difference.

About Toronto
(For more, check out Toronto Offside)
After being the quintessential last place expansion team in 2007, and doing just a little better last year, this year could be the year things happen for TFC. They have four points in their first two games so far, and both of those were away matches. (Although must say that the goal that got the draw against Columbus was actually a Columbus own-goal.)

This is Toronto's first home game. BMO Field is probably now the second-most inhospitable stadium to outsiders, after us. Their fans will not like the fact that we have displaced them, and they will be doing their best to make our boys feel it. Expect lots of streamers and other stuff to be coming our way.

Toronto starting goalkeeper Stefan Frei is questionable for the game after getting injured against the Crew, so Greg Sutton may start in goal

Players to watch for: (OR: Mostly, I just like them, okay?)

Dwayne DeRosario (attacking midfield). Loved him, hated Houston. Now that he's on a team I like, I love him even more, except when he's playing Sounders. Always, always a threat.

Danny "Jaws" Dichio, forward. If he plays. (Be sure to click on the link. What can I say? Anybody who takes a bite out of a guy he disagrees with is my kind of player.) Dichio is playing his last season before retirement. He may not start, may not even play, but he still deserves a mention.

On the other hand, I have never liked Amado Guevara. Dirty player. (Don't ask me why there's a difference. There just is.) But he's scored two of TFC's four goals this year, so he's a force to be reckoned with. He was gone on international duty against the Crew, but he's back now. In truth, he's probably the player who makes me most nervous about tomorrow.

Marvell Wynne (right back). I love Wynne -- very speedy -- and wouldn't be surprised to see him playing with the US men eventally.

Kevin Harmse (CB or DM). A leg-breaker, is Harmse. Literally. I'm a bit nervous about the possibility of seeing him on the field at the same time with

Adrian Serioux (CB), who has already made it clear he doesn't like European pretty boy underwear models.

And now that I've refreshed my memory on what we're facing tomorrow, I'm really excited!

Game's at 1:00 on FSC and (I think) CBUT. If you can't decide, the Canadian announcers are generally better.