Watch Out for Flying Beer

Share All sharing options for: Watch Out for Flying Beer 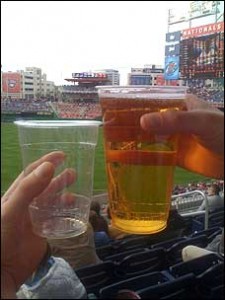 Apparently it wasn't just the guys on the pitch who got hit with flying beer this weekend. Owner Drew Carey took one for the team as well:

The $10 beer may have been meant for Carey, but the television star walked away with nothing more than a few drops on his blue and green scarf "It was a great toss but the reporter standing in front of me got it worse,"Carey said. Nothing could have spoiled Carey's day, after his expansion Sounders moved to 3-0. "And we get as many X-Box's (Sounders sponsor) as we want. You guys get all the B-M-O's you want. Whatever they are," Carey joked. Well Drew, BMO is a bank. And many fans in attendance on a cold, windy day in Toronto would have asked themselves, what exactly they paid for.

Know what always concerned me about flying beer at games? (And I'm thinking specifically about, say, old USL Seattle vs. Portland Timbers games, particularly when the stadium folks made the brilliant move of putting all the away fans by the corner flag, where whoever takes corner kicks is a sitting target.)

Every time I see this happen, I find myself thinking, Wait. Beers here cost how much? How many people want to make a statement enough to throw away that money by hurling an actual beer?

At least, y'know, in its original form.