Share All sharing options for: My Not-Much-of-a-Preview for Chicago-Seattle (OR: Beware of Blanco!) 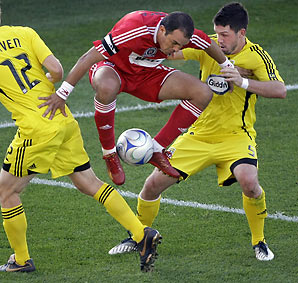 If you haven't watched a Chicago game in the past couple of years, here's the one thing you need to know:

Cuauhtemoc Blanco will piss you off.

Seriously, when it comes to the art of making the most innocuous brush of shoe-leather-on-skin look like Assault-With-Intent, Blanco is Michelangelo. If Tyrone Marshall's glorious, masterful tackle in the box last week had been on Blanco, chances are pretty high that A) the ref would have awarded a penalty, B) Marshall would have been sent off, and C) the world would have come away convinced that Tyrone had shattered a large number of Temo's bones. His facial bones. Blanco is that good at that south-of-the-border drama thing.

And I'm not talking entirely about the out-and-out dive. (Although I am, of course, talking about that, too.) But I'm also talking about really, truly, dramatically and unquestionably drawing attention to the fact that he's been genuinely fouled. Because when it comes to this skill, there's nobody better than Blanco.

The good news, if you can call it that, is that Blanco has been under a cloud this week with questions about whether or not he unduly influenced referee Jair Marrufo in the Columbus game. So perhaps referees will be a little less likely to fall under his spell? We can hope, right?

So. Yeah. Chicago Fire tomorrow. The only undefeated team, despite the fact that they've won only two games. (In case you'd forgotten, we've won four.) Based on the one game I've seen this season, Chicago has a gorgeous style of play and great depth. This seems to be a factor in all of the Power Rankings I'm seeing lately, which rank them as high as first or second, and never any lower than fifth.

I'm wondering if these power rankings are forgetting that despite the fact that Chicago is not actually losing games, they're not actually winning them, either. They're doing a lot of the coming-back-to-draw thing, mixed in with the occasional blowing-lead-to-draw thing. So, in summary, while they have not yet lost, they certainly are not unbeatable, provided we play things right.

I've seen some discussion on who should mark who in this game, and especially who should mark major goal-scoring threats Blanco and Brian McBride. My one thought is this: Do NOT have our hot-blooded Osvaldo Alonso mark Blanco. Unless, of course, the goal is to have Alonso get those last two yellows all in one shot and serve out the suspension next week against LA. Because Blanco could make that happen.

(Question: If a player gets a second yellow in one game and it happens to be his fifth yellow overall, does he have to serve a two-week suspension? My guess would be yes, but I've never seen a rule to that effect. If Alonso marks Blanco, we could put that to the test.)

Also, Tyrone Marshall could mark McBride, because Marshall is very positionally savvy, which a player like McBride will require. And given that McBride is 36 (to Marshall's 34,) Marshall probably wouldn't get outrun.

(Admit it. You're smiling. It's funny 'cause it's true. And by that I mean: Love you, Tyrone!)

And I'm pretty sure that's all I have to say about Chicago. Go Sounders!!