Your Turn: Tell Us Somethin' Good

Share All sharing options for: Your Turn: Tell Us Somethin' Good 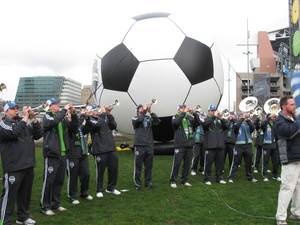 (Sorry if I've dragged you down since the game. I swear, I am so immature sometimes I marvel that I was allowed to reproduce.)

But I was on my way to Starbucks this morning (not a habit) when I spun the dial and hit a country station. (Also not a habit, although I find songs like this really funny.) And they were doing a "Tell Me Something Good" call-in, where listeners would share some positive news.

I think I'm going to copy that. But this only works if you participate. So I'll share first, then I need you to share your own good stuff in the comments. (Come on, now. Don't get self-conscious just because we're all relying on you.)

First thing: There is an adorable Colombian couple who sit in my section. They speak barely a word of English, but they come to every game wearing the colors of the Colombian flag. I'm not sure if they weren't there the first two games, or if I just didn't notice them, but I haven't yet been able to watch them when Montero scores. I cannot wait for that day.

Second thing: Opening day. Watching the sellout crowd file in, then watching the team on the field as they demolished New York (Cup runners up) and thinking "Wow. We could really have something here."

Third thing: The band. I know there have been some issues, but if I were to get to the game too late to see them outside the north entrance before the game, my week would not be complete. My son goes crazy for "Knights of Cydonia," and I'm weak in the knees for "Samba de Janeiro." If they put out a CD, I'd absolutely buy it. And well done to the musicians for keeping a positive, professional public face throughout the controversy.

Also, I like the Hawk's Nest location. It does give a better atmosphere to the entire stadium than we had before.

Fifth: That I get to write about the Sounders every day and people actually read it. Thank you for stopping by. (And this is especially true for those of you who leave comments. Hint, hint.)

Okay, those are mine. Now it's your turn. Tell us your good stuff about the Sounders.