Berhalter or Hurtado on the All-Star Team? The Choice is Yours. (Kind of.)

Share All sharing options for: Berhalter or Hurtado on the All-Star Team? The Choice is Yours. (Kind of.)

VOTE HERE. That's the importand part of this post. If this is all you read, click on the link and go vote.

Seattle fans, I have a question for you: who would you prefer to have on the MLS all star team? The guy here, rolling on the ground as if shot while still managing to clutch the ball like a two-year-old who doesn't want to share his toy? 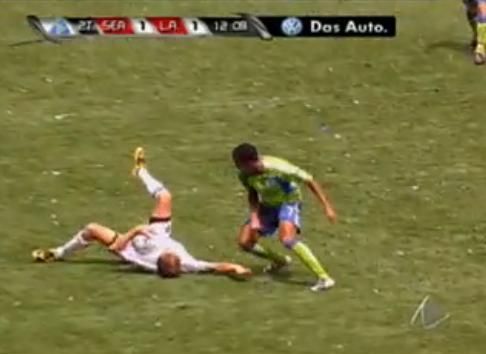 Or the guy below? The one you can tell is still seriously attempting to go for the ball despite the opposing player's attempt to snap him in two. (No, I'm not still bitter about the game. Or anything. Why do you ask?) 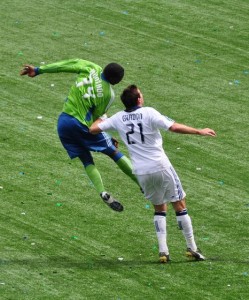 This choice is yours. (Or, rather, 25% of the choice. Which doesn't sound nearly as exciting or dramatic, does it?)

It's time for voting for the MLS All-Star team, and I believe it is our job to tip the balance in favor of our boys. Fan voting counts for 25% of the total vote, with the remainder coming from coaches and GMs, players, and the press (25% each.) What this means is that we wouldn't be able to get less that the best players in (TFC tried last year to no avail), but we can tip the balance towards Seattle players by voting our allotted ten slates of votes per day.

(Yes ten. What, like you've got something better to do on non-game days?)

The formation they force on you is 3-5-2, which I've always found interesting. No glamour in being a central defender, I guess? We only need one? Defense is entirely overrated?

Also, we're playing Everton in the All-Star game. Home of Tim Howard. How fun would it be to see the old US Nat'l Team goalkeeper take on the newer one? A lot. Is what I'm thinking.

Our players who are up for the honors:

Defenders:
Jhon Kennedy Hurtado
Tyrone Marshall
Nathan Sturgis
James Riley (I say we vote for him just to cheer him up a bit, whaddaya say?)

Does that help you make up your mind? Then go vote! Now! Link at the top! And then do it nine more times. And the same tomorrow. And the next day. All the way through July 6.

What are you still doing here? You're supposed to be voting! Now shoo!