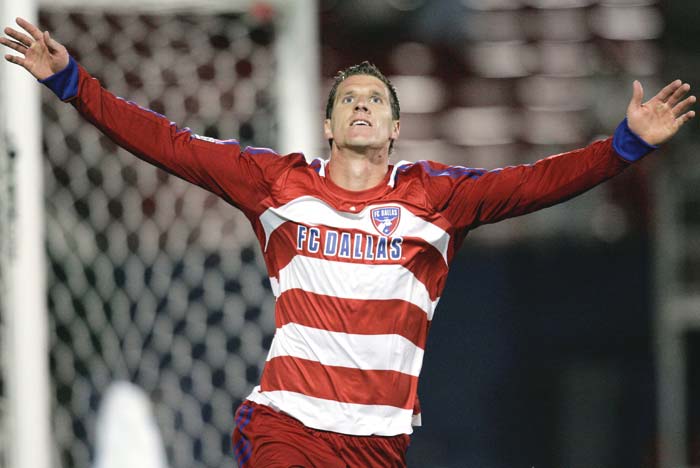 Nobody Loves You When You're Down
Dallas is in the midst of a 3-game losing streak, their second of the season. They have been outscored by a 2-to-1 margin both at home and on the road. Their last victory was a 3-2 home win against Toronto on April 29, a game only 6,813 fans showed up to watch.

Besides dismal form, record and attendance, Dallas has been horrible on defense. They have yet to record a shut out and have given up two or more goals in 6 of 8 contests. To make matters worse, starting goalkeeper Argentine Dario Sala, will miss 4-6 weeks after an MRI revealed bone bruising on the left knee he had operated on in March. Ray Burse will bring his 1.79 GAA (goals against per 90 minutes) and .600 AVG (saves per shot) to start between the pipes. To get an idea of just how soft the Dallas defense really is, compare that to Kasey Keller's .32 GAA and .875 AVG.

Wide Shoulders
National team prospect and runner-up in the Budweiser Golden Boot last year, Kenny Cooper may only be biding his time in Dallas while he awaits the call from a European club. However, he is doing so in style with 4 of the side's 7 total goals. He leads the MLS in shots (31) and shots on goal (19). The rest of his team has a combined 3 goals, 5 assists and 22 shots on goal.

Beyond Cooper, the midfield pair of Dutch national David van der Bergh and Brazilian Andre Rocha have shown some signs of life on offense. van der Bergh leads the team with 2 assists. Rocha has started at RM since April 2, and recently recorded his first goal of the season against DC United on May 2.

Seeing the gargantuan Cooper bang it out with Hurtado and Marshall should be fun to watch.

Local Boys
Rookie defender George John was born in Shoreline, WA and was a four year member of the University of Washington soccer team. 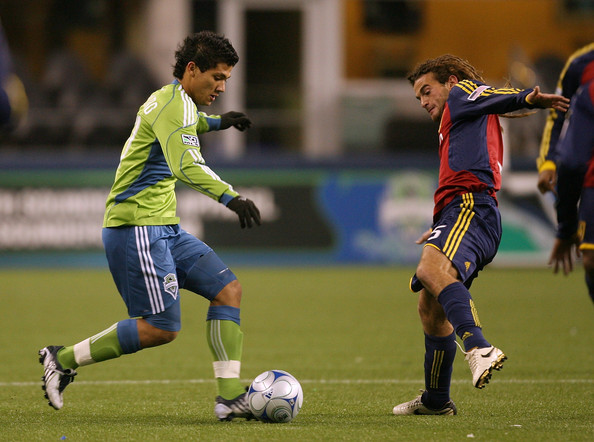 Discipline
Seattle has had 3 players ejected this season, all in the last five games. However, the club is only 12th (80) in fouls committed. Those two numbers do not add up. The fans must love the intensity players show on the field, but I would expect Sigi Schmid to run a tighter ship.

James Riley's ejection for "violence" was warranted on Sunday, and definitely cost the Sounders points in a game that was there to win. I would expect Seattle players to be on their very best behavior on Saturday, lest they start to get a bad boy reputation with referees around the league.

Defensive Discipline
Seattle is tied for second in the MLS for goals allowed (5). Two of the five goals were scored while shorthanded. The CB duo of Tyrone Marshall and Jhon Hurtado has exceeded all expectations, aided by my MVP candidate Osvaldo Alonso and workhorse Brad Evans from the midfield. The man running the show, Kasey Keller has been playing like he was 30 years old again.

Spreading it Around
Seven players have combined to score Seattle's 11 goals this season. Three players are tied for the team lead with three assists each (Alonso, Jaqua and Zakuani). Seattle's leading scorer, Freddy Montero (3) will be back from suspension this week.

Finding his Form
Anyone watching the LA-Seattle game on Sunday might have noticed a bald 30-something-year-old running around the field, jump-starting attacks and controlling the tempo. That would be designated player Freddy Ljunberg finding his form.

Watching him play was a joy on Sunday, and it looks like he may have found a good chunk of his match fitness and pace that made him the 11th ranked player on Arsenal all-time top 50 list. If he builds on that performance he could end up making a major impact on the MLS in his first year.

Heating Up
Sebasiten Le Toux is on a tear in the last three games. On top of a two goal, two assist performance against RSL in the US Open Cup, he came off the bench against a tough Chicago side and played a key role in bringing the 10-man Sounders back for the tie. On Sunday, Le Toux scored his first MLS regular season goal by burying a dime of a pass from Jaqua into a wide open net.

He should get the start at the LM spot this week and cause plenty of problems for the Dallas defense.

Sigi Versus Schellas
Sigi Schmid saw Schellas Hyndman in the NCAA six times, going 4-1-1 against the head coach of SMU, including two NCAA Championship wins in 1985 and 1990.

Prediction
FC Dallas has given up an MLS-worst 15 goals this season, on pace for 56.25 goals for the year. That is one goal every 48 minutes. Things don't look good as they welcome the high-flying Sounders to town, who score a goal every 65 minutes of play. Unless they catch some big breaks, this may be a very, very long day for the Hoops. 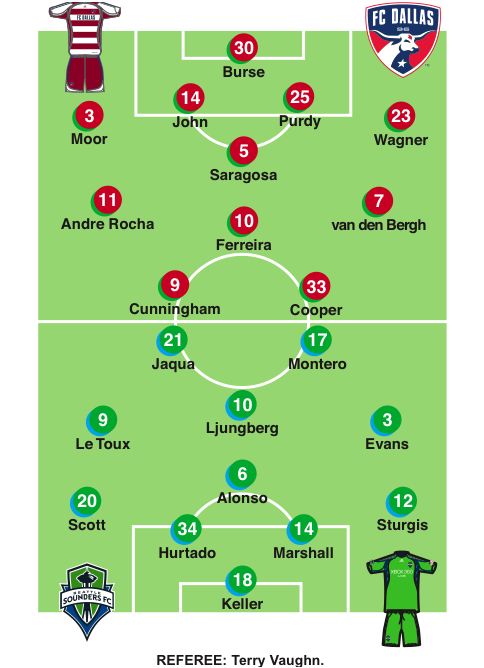