Western Conference Clash
Colorado sits just 3 points behind the Sounders in the Western Conference standings, tied for 3rd with the Houston Dynamo. Riding a 3 game unbeaten streak, the Rapids look to maintain their perfect home record against the Sounders, who travel to Colorado for the only time this season.

Conor Casey
The driving force behind the Rapids' attack this season is nine time US senior team selection Conor Casey. Conor has tallied 5 goals this year, good for 2nd in the the league in goals scored and is also second in shots (28) and fouls suffered (20). The New Hampshire native can also lay claim to the second fastest goal in MLS history, which he scored 16 seconds into an April 4 match against the LA Galaxy.

Stingy D
The Rapids have given up only 9 goals this season, 4th best in the MLS. However, the side has only conceded 2 goals on their home pitch. With a formidable back line of Jordan Harvey, Ugo Ihemelu, Scott Palguta, and Kosuke Kimura, even national team prospect Cory Gibbs can't find space on the talented defense. To make matters worse, international star Pablo Mastroeni, with his 63 international caps, two world cups and destructive midfield play should be a headache for Seattle's attack all day long.

Ex-Sounders
Colorado GK Preston Burpo played for the USL Sounders for 9 years and was the all-time leader in games played, saves and minutes. Cirian O'Brien and Jordan Harvey both spent time in Seattle on brief loan spells.

Depth
One through eleven, the Seattle Sounders rival the talent of any MLS squad, but recent injuries have exposed a lack of depth that may lead to greater struggles this season. The injury report reads like an epic novel:

Luckily, James Riley is back from suspension. Patrick Ianni will fill in at right back if Sturgis cannot go. I am not exactly sure what "migraine recovery" is, especially since the migraine was last week, but if Freddy can start, Evan's absence should not be too painful. However, if Ljunberg has to sit, Sigi Schmid is left with few options. His best choice might be to move Sebastien Le Toux to CAM and put Sanna Nyassi on the wing. However, we could also see Peter Vagenas in at CAM.

Is Fitness an Issue?
The Sounders have allowed only 6 goals this season. 5 of those goals have come in the last 15 minutes of the first (3) or second half (2). In addition, the Sounders are yet to give up a goal in the first 30 minutes of any game and have given up only one goal in minutes 46-75.

The sudden drop off in defense could be due to a lot of factors, including lack of focus, loss of intensity, change of tactics or simply a statistical anomaly. However, a very likely factor is fatigue. Is Seattle fit? It may be too early to tell, but if this trend continues it may be very well due to a lack of match fitness.

Freddy Ljunberg v. Pablo Mastroeni
Assuming Freddy makes the pitch, this should be an exciting match up to watch. The two feisty, competitive veterans will fight to control this middle of the pitch, where the game could turn. Ljunberg looked like he was just finding his form against the Galaxy on May 10, but had to sit out for a migraine last week in Dallas. If he can bring the blazing speed and up-tempo play we saw against LA, Mastroeni will have his hands full, and be less able to provide support to his defense.

Steve Zakuani v. Nick LaBrocca and Kosuke Kimura
Steve Zakuani is making absolute fools of MLS would-be defenders this year. However, in LaBrocca and Japenese national Kimura, Steve is facing two very quick, experienced players. Can they stop Zakuani? I doubt it, but they should be able to slow him down. If they can, it will help a solid Colorado defense contain a Sounder attack.

Prediction:
With two stingy defenses and capable strikers on both sides, this game hinges on the play in the midfield. On paper, Seattle holds a huge advantage despite some key injuries. However, Colorado's strength this year has been their play as a cohesive unit.

Seattle must maintain possession and look to attack with high-tempo and fluidity. If not, Colorado can and will turn this into the typical, choppy, kickball-like MLS game. The last thing the Sounders want is a war of attrition in the midfield.

Result:
1-1, make that four straight ties for the Sounders. 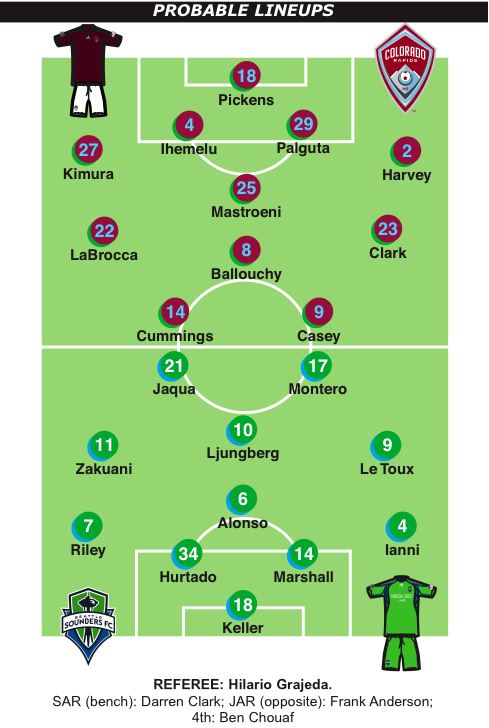