Share All sharing options for: A Big Old Headache 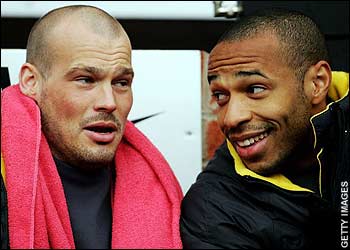 So can your friend play instead?

As most of you know probably know from today's article in the Seattle Times, Freddy Ljunberg did not travel with the team due to, "the effects of a debilitating migraine."

For a Sounders team that has both self-imposed challenges through suspension and now a recent rash of injuries, the timing could not be worse as they sit only 3 points ahead of both Colorado and Houston in the Western Conference Standings. Sigi Schmid now faces an interesting choice of exactly who to start at CAM, considering Evans is sidelined with a sprained ankle and concussion.

Migraines typically last 4-72 hours, but some victims report feeling the effects for as long as a month. There is not much information on whether or not Freddy experiences frequent migraines, but here are a few theories of what triggered the headache, from most to least likely:

1. Physical and emotional stress as a result of referee Tim Weyland's performance at the Sounders-Galaxy game.

2. Weather- Migraines can be caused by wet weather or significant changes in barometric pressure... that NEVER happens in Seattle!

3. MSG- Maybe he stopped by Panda Express after practice.

5. Bright lights- The sun came out.

Anyone else have a theory?