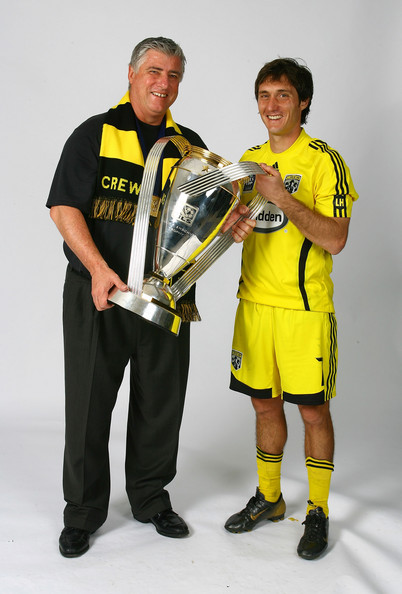 Last year Sigi Schmid won the MLS Supporters shield, MLS Cup and MLS Coach of the Year in his third season with the Columbus Crew. He was also the second coach to win 100 games in the league. After the season, Sigi up and bolted to Seattle. Having been to Columbus, Ohio, I do not blame him one bit.

"It was hard because it had taken us three years to put the team together,” Schmid said about his departure from Columbus. “You can see, despite the record, that it’s still a quality team and a quality group. Winning a championship always puts you in a special place. The way things happened, it is what it is. I’m here now and so you move forward.”

It gets interesting as Scmid will face off against ex-assistant coach Robert "The Polish Rifle" Warzycha. How much the two know each others style is unclear, but it could have a big impact on the match.

"El Mellizo"
MLS MVP Guillermo Barros Schelotto strikes fear into the heart of MLS defenders, and he should. He scored 62 goals in 192 matches for Boca Juniors to go along with a handful of titles and a near diety-status in his hometown of La Plata, Argentina.

Schelotto came to the MLS in 2007 in search for more playing time. In 2008, he recorded 7 goals and 19 assists and put on one of the more impressive MLS cup performances in league history when he recorded 3 assists in a 3-1 victory over the New York Red Bull.

Much like Blanco, there is not much the Seattle defense can do to slow the Argentine ace down. He already has 6 goals this year, good for a tie for the scoring title. The best Seattle can hope for is to keep his back to the goal and make other players try and beat them instead.

Veterans- Good News, Bad News
The Bad News First: Besides Schelotto, Frankie Hejduk, Emmanuel Ekpo, Brian Carroll, Robbie Rogers, Chad Marshall, and Eddie Gaven all have years of experience playing in the MLS (not to mention Pat Noonan, who is struggling with back problems). They are a talented group, built by Sigi, but it was not just Sigi and Schelotto that led this bunch to a championship last year.

The Good News: Hejduk and Carrol are both out, leaving the Crew minus two of their top defenders and their team Capitan.

We've been really unlucky with injuries. To lose BC in the middle of the field, he's kind of like the heart and soul of this team. We have guys ready to step up. Everyone else on the field is going to have to step up as well but we can do it.

Tie One On
Anybody else sick of watching the Sounders tie games? No doubt last weeks 2-2 draw against a dangerous Colorado team can be seen as a positive, especially considering the patchwork midfield, but if the Sounders want to get it done in the regular season, it will not be 1 point at a time.

Considering Seattle's expansion status, the team's performance to date has been incredible, but we have all seen the way this team can play when it all comes together with great build up and POISE AND COMPOSURE in front of the goal. Fredy Montero has it, so does Freddy Ljunberg and Brad Evans, but Sebastien Le Toux's pass first mentality, Steve Zakuani's panic attacks (or just plan bad luck) and Nate Jaqua's "rapist touch" (Copyright Drake Townes-Witzel 2009) have cost us a lion's share of goals this year, and with it a fair share of points.

The Midfield
A week removed from losing central defensive middy Osvaldo Alonso, the group should be bolstered by the return of Freddy Ljunberg and possibly Brad Evans. The disparity between Ljunberg/Alonso v. Vagenas/King was very evident last week, as the defense struggled mightily and the midfield failed to have much impact on offense for the Sounders.

Alonso is key to the success of the defense because of the way he makes opposing midfielder's lives complete hell. However, at least with Freddy and Brad back, the passing out of the center of the pitch should improve.

They had a lot of guys that can win the game for them. They are the type of team that if you focus too much on what they do, that’s too much to focus on. So you just have to know you’re back home in front of 30,000 fans – just focus on what you can do and come away with the three points.

Prediction
At full strength, the match up is a push talent-wise. However, with two of the Crew's most important players (Hejduk, Carroll) on the sideline, Seattle is at a major advantage. Mental errors, poor finishing, defensive miscues and Guillermo Barrios Schelotto are the only thing capable of stopping the Sounders. This is not a must-win situation for Seattle, but it is a game they can and should win.

Seattle cruises into halftime with a 2-0 lead and hold on for the 3-1 victory despite Schelotto's antics.
Montero with a brace. 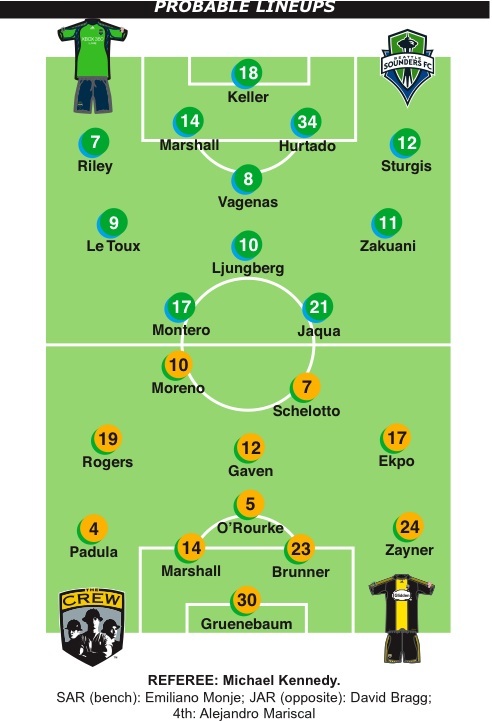