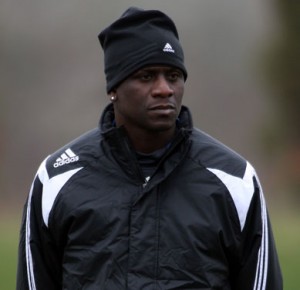 Steve will be back with some post-game thoughts and player ratings in a little while, and I'm still working my way through watching the game. (I'm in the middle of the first half, and this is painful.) Till then, here's the second in our three-parter of Dave Clark's Sounder at Heart interviews.

Again, due to technical difficulties Dave from Sounder at Heart is temporarily without his own site. Seattle Offside is reposting some of his recent interviews to be sure that readers have access to them during the hiatus.

As I continue to look at the tactics and strategy of Major League soccer and specifically the techniques of Coach Sigi and Sounders FC. As I perused the Sounders roster, media guides and what-not I discovered that possibly the person outside of the Schmid family that knows the most, is someone who has just entered their coaching career this year.

Assistant Coach Ezra Hendrickson has played for Sigi with two teams (LA Galaxy and Columbus Crew) for a half dozen years, plus played for the Dallas Burn (pre FC days), Metrostars, DC United, Chivas USA and the Charleston Battery primarily as a Wingback, but also as a central defender and a traditional flat four outside back. He also has 123 caps with his national team (St Vincent and the Grenadines) where has worn the Captain’s armband. Ezra entered the coaching ranks this year, and looks to extend his soccer career. We started our conversation talking about his transition from being that player to being a coach.

Coach Hendrickson: Its certianly been different, but I enjoy it. I love the game and wanted to stay with soccer, and am very pleased to be giving something back and teach others what I know.
Dave Clark: Do you have a focus in your role with the team?

Coach Hendrickson: Yes, I focus primarily on defense, looking at past film, or getting edits for the upcoming match. So for its been great, we have a good defense, keeping the ball out of the net. Its easier keeping the goals down when you have the top keeper in the league.

Dave Clark: You played a lot outside and attacking, and coach seems to be doing that with the Sounders, is that the future of the position?

Coach Hendrickson: Well the modern game is played with outside back sthat not only defend, but are good the ball. Wingbacks go up in atttack and get the other team out of balance. The modern game is where all eleven players attack and 11 defend. Every one now has to play with the ball, and help break down the opposition’s shape. A wingback that goes up can often find themselves unmarked which gives the club an opportunity.

DC: Do you expect that we will see more centerbacks get involved in the attack?

DC: I have noticed that Marshall and Hurtado are key to starting attacks that take only 10 or 15 seconds to get from defensive third to a shot on goal. Is this what you are talking about?

Coach Hendrickson: Yes, they win most of the balls on defense and when they win the ball the attack starts immediately. The key is to win the ball and then transition. We need to keep possession and that first pass needs to be effective.

DC: Sounders seem to go into a rapid transition, is that by design of the coaching staff or due to the players on the club?

Coach Hendrickson: That’s by design. Opponents are most vulnerable right when they lose the ball. So a quicker attack is more likely to catch them unaware and force a bad adjustment. The key on offense is the win the ball quickly and then utilize space.

DC: I talk about this about running back on your heals, and how unnatural it is for the human body. It forces bad reactions.

Coach Hendrickson: Sigi coaches that quick transitions with possession is the key. It opens up space and that catches the other team out of balance. I like to say that a team must be fast but not hurry. You know you take the right amount of time to make a good decision, but quickly. The key is to win the ball, but if you give it up all that defensive work goes for not. So not helter skelter, but fast, that’s how you attack.

DC: Let’s look at the game coming up. Glenn Davis just said to me that the key to the Fire game would be to see how the defensive triangle handles McBride. What’s the plan?

Coach Hendrickson: We know that McBride is a good, lethal arial guy and we know that they have speed on the wings with Nyarko, Mapp and Rolfe who will try to run off him. So the key would be to cut down the supply to McBride, because like any air guy, if he doesn’t get service he’s not effective. He’s very good. He’s been in the EPL and successful, and so we’ll have to cut the service that will primarily come from Blanco, and have a guy to win those battles, but also to keep the defense running with their own players. But that’s our key, cutting the service.

DC: Are there any teams from your past with the league that this year’s Sounders remind you of?

Coach Hendickson: Last year in Columbus Robbie Rogers now that we have Steve Zakuani, so we are similar on the left, but for a team not a complete match from MLS.

DC: Is that because MLS is constantly changing over the years?

Coach Hendickson: Teams are asked to play differently now, fast paced, and not so direct. More athletic and counter-attacking and so the league is different from year to year.

DC: Sounders are playing in front of nearly 30,000 people every week. Was there a point in time that you thought the league was going to be this successful?

Coach Hendrickson: The closest was back in LA, we were so successful for so many years. The fans got into it and were very supportive. But what we are witnessing here, it is special. As a coach, with the fans cheering its great. I can imagine at being a player being in front of 30-40 thousand, its got to create excitement and energy with the crowd standing and cheering. It also makes it difficult to play against.

Thank you to the coach for joining me. Guys, the preview will likely go up tomorrow midday since I got this opportunity, but hopefully you enjoy these interviews this week.