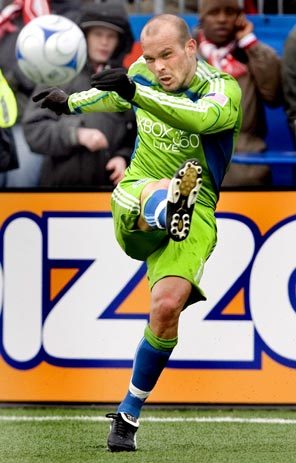 A man and a goal down, it seemed the Sounders were headed for another shutout defeat. However, a strong Brad Evans run down the right flank resulted in a corner. Ljunberg's inch perfect cross was buried by Marshall and the Sounders then overcame near constant pressure from a determined Fire attack.

It took a bit of luck and a lot of poise, but a defense that continues to surprise was the key in Seattle taking a point back to the Northwest.

The following player ratings are on a scale from 1-10. Feedback welcome.

Kasey Keller: 8
A busy day for Keller. Made several key saves, although Chicago's shooting was not too impressive. Great positioning as usual, left helpless on Pappa's goal. I was skeptical about his age and ability to play at a high-level, but his 457 minutes of shut-out play proved me totally wrong.

Jhon Kennedy Hurtado: 6
Poor clearances led to several extra chances for Chicago. He has been better. Still, he is slowly becoming one of my favorite Sounders.

James Riley: 6
Usually contributes more on the attack. Any defenders day is made worse when he is facing Blanco, Nyarko and McBride. Picked up a stupid yellow card in extra time when he had a spat with Chris Rolfe.

Tyrone Marshall: 9
Clearly the man of the match. Active and physical presence from his yellow card in the first minute on. Turned McBride into a non-factor for most of the game and made crucial plays again and again. Blanco turned him dizzy to set up Chicago's goal, but redemption was his on his well-take equalizer.

Nathan Sturgis: 5
Nyarko made him look quite slow. Wasteful on set pieces.

Osvaldo Alonso: 4
Had his hands full with Blanco. Tough job for anyone, even arguably the best defensive midfielder in the MLS. However, his passing was way below average. A bad day in general for the midfield.

Brad Evans 6
The first 30 minutes of the second half was probably his best offensive performance all season, causing havoc down the right flank. Won the game-tying corner. Victim of the intense midfield pressure from Chicago for the rest of the game. No goals through the five hole today.

Steve Zakuani: 5.5
Backed up last weeks stellar performance with an up and down game. Crossing was off and Tim Ward handled him better than the San Jose defenders. Hard day for the Sounder's midfield in general.

Freddy Ljunberg: 7
He plays like he still thinks he is 25. It is too bad he isn't but his composure and tackling were crucial to the game's outcome. Inch perfect corner on the goal.

Nate Jaqua: 3
Seattle generated very few scoring chances. Nate blew at least 3 of those. I cannot tell you how much watching him week after week is frustrating me. I want to see Zakuani and Montero up top together. Le Toux is enough of an aerial threat on set pieces.

Freddy Montero: 4
Red card changed the game's complexion and yes, he deserved it. Maybe it was on purpose, maybe he was frustrated, maybe it was just bad body control. Whatever the case, it was clearly a straight red. Beyond that, Montero was completely removed from the game by Chicago. He rarely, if ever, faced the goal and failed to track back to look for the ball and help out his struggling midfield. This is 90 straight minutes of Montero's disappearing act, dating back to the second half of the San Jose match. Is there cause to be worried?

Sebastian Le Toux: 7
Active and dangerous filling in for Zakuani. Better on defense than Steve. I advocate him starting and moving Zakuani up top.

Coach Sigi: 9
Did he really sub in a striker for Ljunberg in the 81st minute? Chicago was all up in our grill. I'm sure the defense could have used an extra body. Is there something I was missing? Looked like he had adjusted well at half time, before Montero's elbow changed the game plan. You can't argue with results. No wonder Columbus is stinking it up.

Color Commentators: 0
Soccer announcers in the USA are absolutely horrible. I mean, disgustingly, horribly bad. I think we need a commentary revolution. Anyone feel me?