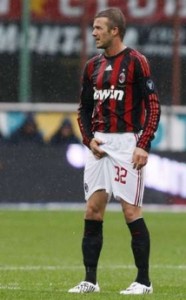 What this means, is this: I have a trivia question for you. And if I'm feeling really motivated (which is not a given, seeing how it's Monday) I will give the first correct guesser one of my much-coveted Seattle Offside Certificates. Kind of like this one. Except, y'know, different.

Question: Which of our players were shipped out by the Galaxy as Alexi Lalas and Co. were making their vain attempt to create the ultimate team for David Beckham?

Bonus question: What did the Galaxy get in return for each?

Also: You know you've been soccer blogging way too damn long when you see a photo like the one to the left and think, "Well, you just never know when you might need something like that." So you go to save it as "Beckham shorts" and your computer tells you, "That file already exists."

I'm pretty sure it's not actually my fault. Blogging and Beckham just bring out the worst in me.