Brought to you by Steve and recovering Galaxy fan, Laurie. 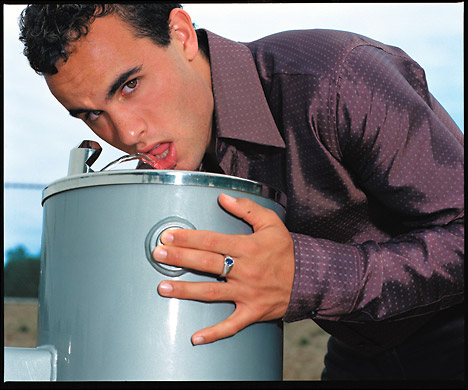 From Laurie: I thought it would be easy to write a preview of the Galaxy players, given that I'm a recovering Galaxy fan. Then I sat down to start and... Not so much. The Galaxy have traded off most of the players I knew and loved, so I'm learning as I go along. So are they.

Donovan Ricketts -- the goalkeeper for the Jamaican national team -- was a huge acquisition this year. One of the reasons they were awful at the start of the season was that they were lacking quality in goal. Now they're not. Having Kasey in our goal and knowing he's there to clean up any messes allows our guys to be a little more daring and creative. Ricketts does that for the Galaxy. The Galaxy won't be pushovers, and Ricketts is a major reason.

And, of course, everybody says "Watch out for Landon Donovan." So...watch out for Landon Donovan. If he gets behind the defense, it's almost certain that he will score. (Seeing him go one-on-one with Kasey could be interesting, although I'm hoping it doesn't happen.) He's also very good at making it happen for others, delivering perfect balls to create scoring chances. Three assists so far this year, so best to just shut him down from the start.

The Galaxy are among the best at getting penalty calls, too. I think there have been at least three so far this year? Versus our zero? Perhaps we could take lessons? When the Galaxy get the call, Landon generally puts them away, with the help of a bizarre OCD pre-penalty ritual that involves lots of touching and kissing, which I hope none of us have to witness. The Galaxy have scored 10 goals this season, and five of them are Landon's. So...yeah... Watch out for Landon Donovan.

Edson Buddle is only recently back from injury, if I'm not mistaken, but he and Landon have proven in the past that they can be lethal on goalscoring opportunities. And Alan Gordon can score as well, usually off the bench, but in general I consider him overrated. (And for the record, he used to play for the Timbers. Which probably goes along with that whole "overrated" thing.)

The one player I still have fan feelings for is Chris Klein, who will probably be playing right midfield, and who has always played with his whole heart. He's not as fast as he once was, but he has a good mind for the game, is great off the ball, and always gives 100%. So feel free to shut him down, guys, but don't hurt him. Because I still love the guy.

Because LA had so much going on that didn't work last year, they did some major housecleaning in the off-season. This means that there are a lot of players I have no clue about. Omar Gonzalez has been getting rave reviews as a central defender, but has also been responsible for the occasional screw-up, as can be expected from a rookie. He's 6'5", though, so watch out on set pieces. He already has one goal this year. Dema Kovalenko can be brutal in the midfield; if he were on my team, I think I'd love him. And Gregg Berhalter was brought in late in a desperate attempt to shore up the back line in April, and from what I hear he's going a pretty good job of it despite being 35. And...wait... How did I not know they got Todd Dunivant?

(I am so out of touch with this team.)

I have absolutely no clue at all on guys like Stefani Miglioranzi or Mike Magee, either, although Magee scored the equalizer in stoppage time against Salt Lake.

And Bryan Jordan used to play for Portland. 'Nuff said.

And I think that's all I have to say about the Galaxy players. Except this: Watch out for Landon Donovan.

And now, back to Steve. 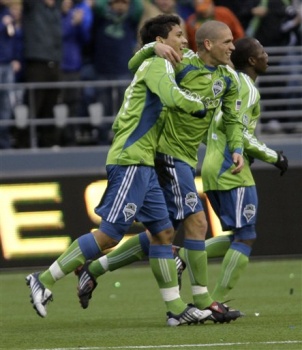 Fresh off a character-building and somewhat lucky 1-1 draw on the road, the Sounders are back in QWest field, where goals have been in short supply for visiting teams. In Kasey Keller and Ricketts, we have a match up of two stingy goalkeepers, but overall the edge has to go to Seattle on defense. Backed by a raucous home crowd, if the Sounders can manage to keep 11 men on the field (which has become a challenge this season) this is their game to lose. Let's take a look at some keys to the game.

LA should be used to large crowds on the road by now, but this time they will not be here to see golden boy David Beckham. The energy and noise from the fans at QWest is unrivaled in the MLS, and a major factor for the Sounder's home success.

On attack, Seattle will be without the services of Colombian starlet Freddy Montero, hit with a red card for throwing an elbow in last week's game. How will Coach Sigi adjust? One option is to move Steve Zakuani up to the left striker spot.

Zakuani has been extremely effective starting at LM, part of an amazing rookie class. However, his natural place on the field is at LS, which could be a contributing factor he has not played a full 90 in his last two starts. It would be interesting to see how he responds with Montero suspended and if the good chemistry we have seen between Zakuani and other the rest of the midfield can carry over to a new position. Other options include shifting to a 4-5-1 with Nate Jaqua being the lone man up top. Clogging the midfield may be an effective strategy against the experienced, but slow and rickety, Galaxy middies.

We cannot talk about Seattle's midfield without giving due props to Osvaldo Alonso, who was featured on the cover page of Seattle Time's Sports section earlier this week. He is a cog in this team, making the defense that much more effective and providing that key link between the back line and the attack. I imagine he will be wildly dominant against a Galaxy midfield that offers little in creative attacking options.

Seattle's defense will have its hands full with Donovan and Buddle, but after holding an attack that included McBride, Nyarko and Blanco to just one goal, I am not too worried about what has been a surprisingly solid defense, held down by center back duo Tyrone Marshall and Jhon Hurtado. James Riley has been serviceable in defense and particularly effective on overlapping runs with Evans or Le Toux on the right side.

The weak link on D is Nathan Sturgis, who showed a lack of ability to put pressure on any of Chicago's attackers last week, giving up entirely too much space down the right flank. He may have just done enough to lose his starting job. If Sigi decides not to look down the bench to Patrick Ianni and Tyson Wahl, I would expect Bruce Arenas to test Sturgis all night long.

If Donovan gets behind the defense, like he often does, he will score. The Seattle defense was focused and organized against a potent Fire attack. Hopefully, that will carry over to this week.

Key to the game: Disciplined defense to contain Donovan and Buddle. Loads of pressure by the midfield to keep the attacking duo from getting the ball in the final 3rd.

Prediction:
Steve's prediction: 3-2.
Seattle wins it in a high-scoring affair. Donovon picks up a brace.

Laurie's prediction:
Laurie doesn't make predictions before the games of teams she loves because she's superstitious. She'll be happy to predict the outcome after the game.