The Seattle Sounders FC welcomed NY to QWest field back in March for the expansion franchise's inaugural game. They then proceeded to take the Red Bulls apart 3-0, the biggest margin of victory for Seattle all season. Since then, the Sounders have had mixed results, but still sit comfortably in 3rd place in the West. The Red Bull, on the other hand, are in the cellar, and somehow things seem they can only get worse.

New York welcomes Seattle to Giants Stadium this time around, hoping to stop a skid of 5 straight losses and no wins since April 8, against San Jose. Of the two league doormats (San Jose being the other), it is the Red Bull that should be the most embarrassed. After losing in the MLS finals in last year's playoffs, the Red Bull have scored an MLS worst 13 goals in 14 matches. To make matters worse, it took them until this past Saturday, June 13, to score their first goal on the road, where they are understandably 0-7-1.

However, Seattle has a cross country trip and the lack of their raucous home crowd to think about. In addition, New York has actually been pretty good at home, picking up 8 points, more than Chicago (6 points) and scoring 12 goals (t-1st in the Eastern Conference).

To make things just slightly more difficult, Seattle is playing it's third game in a week and coming off a deflating come from behind draw after leading DC United 3-1 in the second half of Wednesday's game. It remains to be seen how players will react to a solid performance, but disappointing outcome.

Let's take a look at the probable lineups: 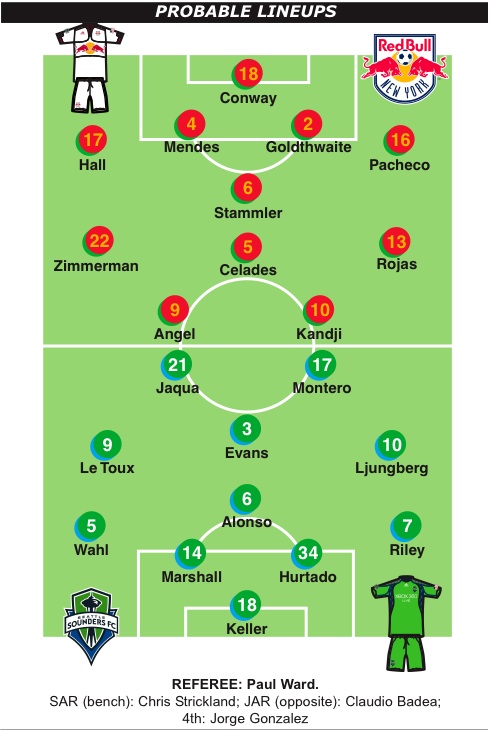 Prediction:
Yes, the Red Bull are a bad team, arguably the worst in the league, but this is their house. This is a team full of players and coaches fighting for their very employment, their careers and what is left of their pride. After Wednesday's big letdown for Seattle, this is undoubtedly a trap game. If the Sounders come out with a hangover (either the kind you get from booze or the kind you get from giving up a 2 goal lead and squandering 16561098490128451092512905128 chances) they will be shocked at the consequences. On the other hand, if they continue to create chances, covert several of them and defend for a FULL 90 MINUTES (see Keller quote), there is no reason to walk away empty-handed.

It seems tougher to call than it should be, but Seattle should pull it off.