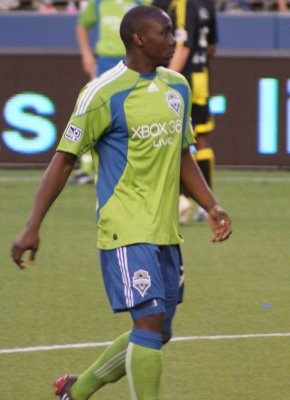 Jhon Kennedy Hurtado stood in his locker when I approached him. He was using his fingers to spread on deodorant gel in his armpits and stuck out his hand to shake mine. I balked, and gave him a fist pound instead.

After the rough start, things went smoothly. He is a very nice guy and seemed genuine with the stuff he said. Thank you to those of you who submitted questions and I hope we can look forward to more interivews in the future.

Steve: So, do you like the United States so far?

JKH: Here I have found a piece of my heart.
(Yo hallo aqui un parte de mi Corazon. This is a difficult sentence to translate, but is one of the nicest and most beautiful things he could say about our fair city. It is a huge compliment.)

S: But you miss Colombia don’t you?

JKH: Yes, of course, but still, I am entirely focused on the soccer part, so I miss it but not a lot because that is what people who complain do...

S: What did your friends, your teammates at (Deportivo) Cali and your coaches say to you when you decided to come to the United States to play?

JKH: In some countries, they do not give the football in the United States much weight, but being here, you find something different. The football here is very good, very tough, very fast. I came to a team with great players, great owners, a great coaching staff and I am happy and content with everything up until today.

S: And so far, who is the best player you have faced?

JKH: There are a lot of players, but we have controlled the top player from most teams so that they could not "do their football," but yes, the MLS teams are very good.

S: Would you like to return to Colombia to play or do you prefer Europe?

JKH: I don’t know. My thought, if I don't stay here, is to go to Europe. It depends on what destiny offers me. I hope it will be something good but for right now I will be here enjoying this as much as I can.

S: And the Colombian national team?

JKH: Some day, some day. I know I will be there. Of course, I am a Colombian and I would like to play for the national team. But, I have to wait patiently and keep working in the same way we have worked up until now and with a bit of luck the opportunity will come to me.

S: Do you think they can still qualify for the world cup?

JKH: From a positive point of view and with a lot of hope and faith I think that we can. Let’s hope that the games that remain, the points they need, and the points they win will be enough to qualify for the world cup.