The (just about) Mid-Season Report Card

Share All sharing options for: The (just about) Mid-Season Report Card

With 15 games behind them and 16 to go, Seattle has played above and beyond expectations for an expansion franchise. Sitting in 3rd place in the dominant Western Conference with 22 points, Seattle is in good position to make the MLS playoffs. A run at the Lamar Hunt US Open Cup is within the realm of possibility as well. Seattle will face off against old USL rival the Portland Timbers at PGE park on July 1st. 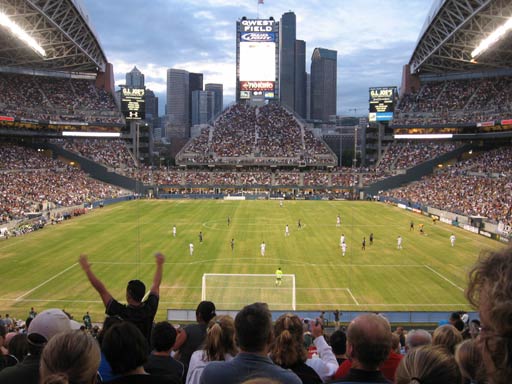 Let's take a look at players, staff and fans to see how the first half the season has shaped up:

Kasey Keller- 8.5
Keller started off the season by going 457 minutes without giving up a goal, an MLS record. Since then, injuries and suspensions have taken a toll on the back line, and the goals against have returned to normalcy. In 14 games total, Keller has given up 12 goals to go along with 4 clean sheets and 41 saves. Keller has been a force and a leader from the back. On a side note, if the opportunity ever arises for a penalty late in a game where we have a blowout lead, let's get this guy his first career goal! 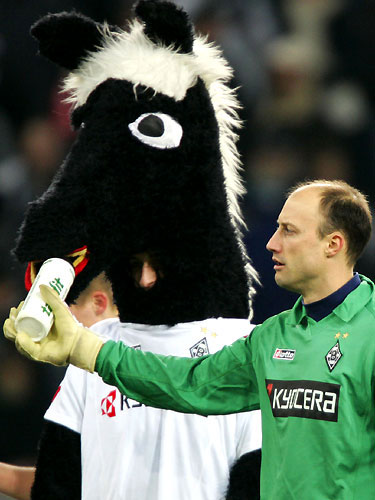 James Riley- 7.5
Seattle's best attacking option coming forward from defense. There are times when he gets caught too far forward, but has the speed to recover. He has also been one of the more consistent defenders, buckling down the right side along with Hurtado. His crossing has been very accurate and he is a headache for opposing players. I can't believe this guy would be marked for the expansion draft... not once, but twice.

Jhon Kennedy Hurtado- 8.5
Hurtado has been everything his scouting report says: strong, a good 1-on-1 marker, a solid tackler with good speed to close opposing players down. He has been quick to establish himself as one of the better central defenders in the MLS. Has pulled some good disappearing acts against the likes of Brian McBride and Juan Pablo Angel. He will find a home in Europe eventually.

Tyrone Marshall- 5.5
An up and down season so far for Seattle's most experienced defender. Unforgettable games like his performance in Chicago, including scoring the equalizer, make you glad to have him around. His last two games (own goal, own assist) have gotten on the nerves of Seattle fans and I am sure have affected him mentally. He is a professional and needs to be a rock both with his play and his focus in the back. Unfortunately, he has made consistent mental errors and seems lost at times.

Tyson Wahl- 5.5
I am willing to admit I was a bit harsh on Wahl in his first start against Columbus. Yes, it was a pretty terrible performance, but since then Wahl has adjusted well to his move to left back and stepped in well at one of the Sounder's weakest positions. He has improved every game, and you can't ask for much more from a player adjusting to a new position. He does not offer much on attack and needs to close out defenders better on crosses, but has been serviceable in his one-on-one marking and good at breaking up plays.

Osvaldo Alonso- 8
The fact that the Seattle was able to acquire the Cuban expatriate back in January is a statement about the quality of scouting at MLS organizations. Who would want to sign an extremely destructive central midfielder with great on-ball skill, efficient passing and a cannon for a foot, right? Thankfully, Alonso slipped through the cracks and ended up in our starting XI. Alonso is a player whose impact cannot be measured in goals and assists. Provides great cover for the defense and makes Marshall and Hurtado's lives much easier. Despite missing a few games, still my mid-season team MVP. 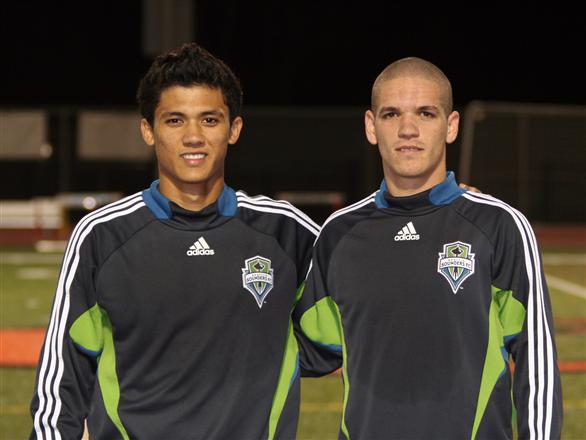 Freddie Ljunberg- 7
Freddie brings vision, speed and creativity to the attack. He has combined very well with Zakuani, Jaqua and even Montero at times. It is funny to hear him off the field: soft-spoken, friendly and smiling, and then see his intensity when he steps foot on the pitch. It took him a few games to get going, and he should have a couple more goals with some better finishing, but that will come as he continues to adjust to MLS play. The most positive sign is that he has stayed healthy.

Brad Evans- 6.5
Injuries have slowed down Evans, whose high work rate and ability to get forward from the midfield have fit in well with the Sounder's game plan. Has a tendency to disappear from games for long stretches of time, especially while Alonso was out. Alonso's return should allow him to get more involved in the attack. Both of his goals have been through the five-hole.

Steve Zakuani- 7
Steve has lived up to his billing as the number one player in the MLS Superdraft. His speed and dribbling has been devastating to MLS defenses and if his career is as a winger, he is learning from one of the best in Freddie Ljunberg. Still, at times he is too slow to react to double teams and his finishing and crossing could use some work. He disappointed me with his body language when he came on as a substitute instead of a starter against DC United. He is used to being "the man" but is playing on a higher level now. Start scoring goals and there will be no excuse to start you on the bench. 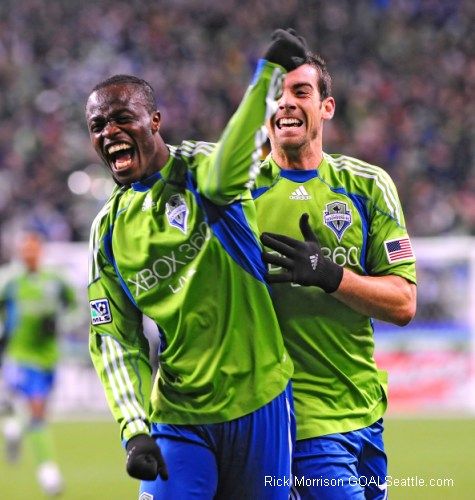 Fredy Montero- 7.5
After his red hot start was marred by some legal issues, Montero has returned to form recently with 3 goals, 13 shots and 5 fouls suffered in his last 3 games. Montero is a rare breed in the MLS, an epic goal scorer playing here before his prime instead of after it. He may be the most dangerous player in the box in the entire league, with his shooting, quickness and agility. In addition, he has gotten better at moving off the ball and creating opportunities for his teammates. Any criticism by Seattle fans is unwarranted. I do not see him slowing down from now on and he should end up as the league's leading scorer this season.

Nate Jaqua- 6.5
Let me start by saying I am not a fan of the big guy/little guy forward pairing that coaches everywhere seem to love. That said, Jaqua has done a decent job in his "big guy" role. There is times when his heavy touch ends great offensive moves, but his ability to hold up the ball and be a target in the box has been solid. His passing is also above average. However, the biggest flaw in his game is his heading. He has no goals with his head this season, something that concerns me as he is a target forward.

Sebastien Le Toux- 6.5
His work rate and effort are superhuman. He never stops running. You need a guy like that on every team. He needs to be more selfish on the offensive end and start shooting. Takes a great corner, but I would rather have his head in the box.

Nathan Sturgis- 5.5
Repeated disappointing performances have landed him on the bench. His spot at LB has been ceded to Wahl for the time being. Undisciplined and slow to react as a defender, but adds more on offense than Wahl.

Patrick Ianni- 6.5
Has been asked to fill in on short notice at a number of positions and has done a serviceable job. Clearly not a starter.

Stephen King- 5.5
Versatility has helped the Sounders in the midfield, though his contribution has been minimal while on the field.

Sanna Nyassi- 7.5
Ability to use speed and get behind defense is tantalizing, but Seattle is just too deep on the wings for him to see much match time. Great option for cup games.

Peter Vagenas- 7
Brings experience and quality off a thin bench.

Roger Levesque- N/A
His size is impressive, but has not had enough time to make an impact.

Chris Eylander- N/A
1.75 games, 2 loses and three goals, none of them his fault.

Sigi Schmid- 9
Has done a good job forming a group of new players into a semi-cohesive unit. Sigi has particularly impressed me by getting the most versatility out of his players. On paper, this is not a deep team, but Schmid has managed to make it one. 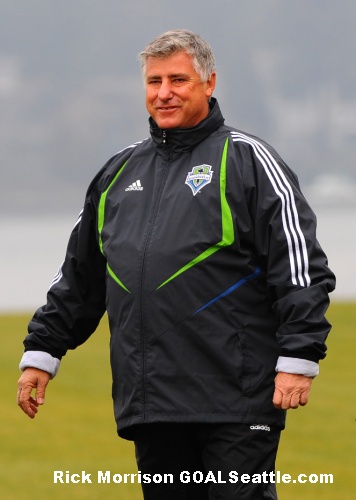 Seattle Fans- XI
Attendance has been great and so is the vibe in QWest. However, booing your team off the field for a 3-3 tie is not. Lay off Montero too, before he decides to bolt off to Spain.