I Want Some of These for OUR Guys. (Oh, and Vote Nate!)

Share All sharing options for: I Want Some of These for OUR Guys. (Oh, and Vote Nate!) 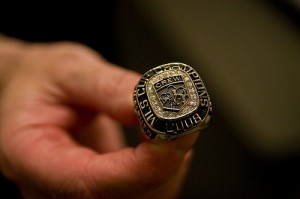 I swiped this photo from Kristina over at the Crew blog. What do you think? Pretty easy to picture our logo on it, eh? And I can also easily imagine one on the hands of Kasey, Fredy, Freddie, Nate and the gang.

Also, I woke up smiling to myself this morning and couldn't figure out why. Then I realized that in that kind of twilight place between awake and asleep, my brain had replayed that third goal. The really sweet one where the formerly MeMeMe Montero did NOT take the shot straight at the keeper, and instead dummied it to Nate Jaqua, who made the goal.

What does this mean? It means two things:

1) That goal was really special, not just because of what it was, but for what it represented about our offense's ability to actually play together, and

2) I'm dreaming about this team, people. This is kind of disturbing.

And speaking of that goal, our Nate and his two goals and one assist were enough to get him the Player of the Week award. Which probably means some MLS voting types dreamed about that goal too. Which is even more disturbing.

(Did anybody ever read "The Stand," where all the people start having the same dream? Pretty sure this is something like that. So...yeah. If it happens to you, go to Boulder. Not Las Vegas. Trust me on this one.)

And speaking MORE of that goal and the Player of the Week thing, does the fact that the award gives me all kinds of warm fuzzy feelings in my maternal area make me a mama giraffe? Enquiring minds want to know.

(And to whoever came up with the baby giraffe image to describe Nate running down the field? Now that is all I can think about. Thanks so much.)

But the biggest point of this post is that Jaqua is also up for Goal of the Week and you need to vote!

Because come on, folks. We let Montero down last week. (And by we, I might actually mean you. Unless you voted. Because I did. Is all I'm saying.) What happened was, Fredy was leading, then Eric Avila took it away from him.

Yes, Eric Avila. Seriously. And Dallas doesn't even have any freakin' fans. So explain that one to me.

Sorry, Sounders guys. We got complacent. It won't happen again.