Share All sharing options for: Portland FO Tries to Head Off Fan Violence in US Open Cup Match 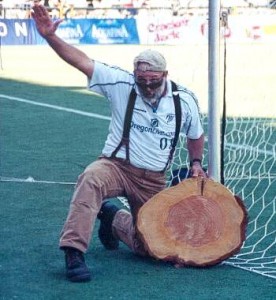 It's no secret that there is no love lost between Portland and Seattle when it comes to our soccer teams.

Okay, that's a bit of an understatement. "Teams and supporters groups would cheerfully rip each other's hearts out and consume them while they're still beating" might be slightly more accurate. And with Seattle now in the MLS and Portland not joining us for two years, this rivalry doesn't have many opportunities for pressure release. This makes tomorrow's US Open Cup match HUGE for both sides.

And the biggest problem with this match is that it's winner-take-all. One side is going to go home thrilled, and the other is going home heartbroken. Couple high emotions with alcohol and there's some real potential for...for...not good stuff.

I haven't stopped by any of the Portland supporter forums recently, but I know that Seattle has a number of busloads of fans going down, and the Seattle forums have been filled with, "Watch your bags and watch your backs" warnings. My guess is it's the same on the other side.

So it's no surprise that there's a lot of trepidation among the powers about this game tomorrow night. To try to head off the potential explosion, the Portland FO sent out the following announcement to the Timbers Army, the main Portland Supporters Group:

With the U.S. Open Cup match against Seattle on the horizon, Timbers management would like to express that this is a great opportunity to showcase our organization, our team and the spirit and passion of our fans and supporters to both MLS and the rest of the country.

There is no doubt that the spotlight will be shining brightly on this match next week. With that, it is important that fans and supporters help reflect the Timbers organization in positive manner that shows MLS and its teams that we belong among the best clubs in the country.

We are fully aware of the passion behind the Portland-Seattle rivalry, and we hope that you represent the Timbers in a loud and collective voice. With the amount of passion involved in this match, we feel it is important to communicate with fans that any violent threats or acts amongst fans will not be tolerated in or around PGE Park on July 1. Should any violent situations arise, those fans, regardless of whose shirt they are wearing, will be removed from the grounds immediately. Those caught taunting other fans will be warned once, then ejected.

Great rivalries drive sports. They lead to spirited support. But they do not and should not lead to physical altercations. Remember that the actions of a select few can disproportionately color the public perception of a group as a whole. Please help us prevent any unnecessary situations.

On our end, we are taking steps to ensure a safe and exciting match for everyone in attendance, including separate sections for both Portland and Seattle supporters groups at different ends of the stadium and separate, designated smoking areas.

Our fans and supporters have been fantastic this season. We fully acknowledge and appreciate the steps the Timbers Army has taken this season to continue to help make match day at PGE Park a fun and enjoyable experience for all fans. This is our chance to model our organization and its support from the community on a large scale. Let’s show why Portland is Soccer City USA and what makes it second to none.

I have relatives who are Timbers fans (okay, technically my husband's relatives, but I still love them,) so I'm kind of in a Montague-Capulet situation. I can love the rivalry, but I'm not real good at the hate-the-people part. I desperately want our guys to come out on top, and I especially want to see the effort spearheaded by former USL guys Seba and Roger.

But more than that, I want everybody to go (or come) home safe, with their hearts uneaten.

Can we do that?