The Sounders could use some of these: 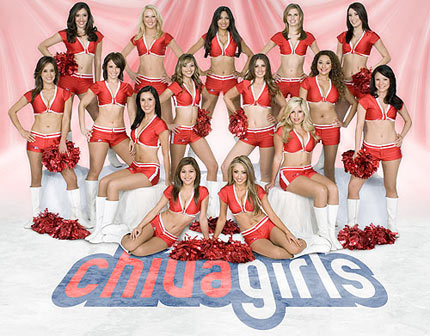 Winless Streak
After a strong start to the season that saw Chivas jump out an early leader, the goats have slowed down and are winless in their last three matches. That is better than the Sounders FC, but the recent drop in form is a reason to be hopeful for the Seattle faithful.

It Can Come From Anywhere
3 of Paulo Nagamura's 4 goals this year have come from outside the 18. His ability to shoot form distance is something that Sounder Peter Vagenas should be mindful of, especially as he missed the first match up while serving a suspension.

However, the threat does not stop there. 8 players have scored for the Goats, including 4 players with more than one goal. The newly center back duo of Hurtado and Ianni will have their hands full dealing with forwards Eduardo Lillingston and Maykel Galindo.

Compadres:
Speaking of Galindo (an ex-USL Sounder himself), he and defensive midfielder Osvaldo Alonso, likely out with a quad injury, walked out of a hotel together during the 2005 Gold Cup and gained political asylum in the United States. Alonso is questionable for the match, but an on-field reunion would be a good subplot.

Crew Quotable:
“The best remedy I’ve seen for getting out of the hole is just hard work. Hard work is going get us
our next win. Seattle is going to be a very difficult team, but it's one I'm excited about because if you want to be the best, you have to beat the best.” 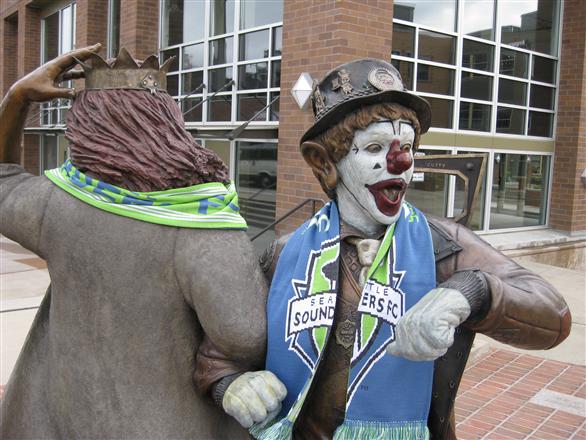 Patchwork Defense
In the past 3 games, Sigi Schmid has used 7 different players to fill out the back four. While Jhon Kennedy Hurtado and Tyrone Marshall started the first 11 games as center backs, 5 different players (Tyson Wahl, Patrick Ianni, James Riley, Nathan Sturgis and Zach Scott) have all seen time as outside backs in only the last 3 games.

With Marshall suspended, we should see Ianni in the center along with Hurtado and will once again be subjected to Wahl playing outside left.

Milestones and Records
-If Jhon Hurtado can make it ten minutes in Saturday's match, he will become the first Sounder to play 1000 minutes.
-The Seattle Sounders have yet to lose (4-0-5) when Kasey Keller plays the full game. Keller missed the previous with Chivas USA while serving a one-game suspension.
-Steve Zakuani has yet to commit a foul this season in 672 minutes of play. 70 minutes more and Steve will break the MLS record for consecutive minutes without fouling, a record held by New England's Darius Barnes (741 minutes).
-One more draw and Seattle will break the single season record for most consecutive ties, currently held by the 2009 Chicago Fire with five.

Key to the Game
The Sounders need to come out on the attack and score first. They must put the pressure on Chivas if they want a chance at beating the MLS premiere team.

Johnathon Bornstein's absence is a big help to the Sounders, but Seattle is missing it's own defensive cog with Marshall sitting for his injury-time red card. Chivas is the best team in the MLS and do not appear to be overconfident despite their 2-0 win last time they faced the Sounders. If the Sounders are to win this one, it will take some serious tactical genius, better focus all over the field and just a bit of luck.

Seattle could not handle Chivas at home, and they probably can't handle them on the road either. 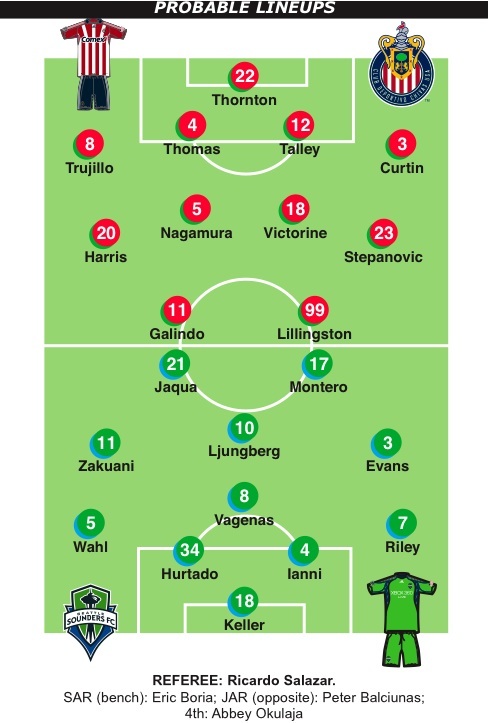