Not Much of A Preview: Seattle vs. Houston

Share All sharing options for: Not Much of A Preview: Seattle vs. Houston 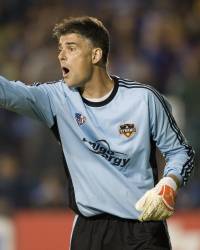 The great thing about having a co-blogger is that I can now do my not-much-of-a-previews while knowing that somebody's going to come in afterwards and fill in the blanks or pick up the pieces. So consider this kind of a...a...pre-preview.

First thing: Have they done anything about the giant Pat Onstad covering part of the upper decks? Because, come on. We've got an even more iconic goalkeeper on the field, and having Onstad up there... Well, that's just wrong. I'll give a big ol' pat on the back to the first person to create a giant smiley face (or better yet, a Keller face) to paste over it.

And speaking of Onstad, has anybody watched a game recently? Has he gotten over that unfortunate Grecian Formula phase yet? For the past few years, he has had the some seriously distinguished salt-and-pepper locks. Looked really good on him. (Or, y'know, so I've heard. Honey.) Then I turned on one of the early games this season and... What. The. Hell? Cured me of any need to watch Houstonian roundball real fast, lemme tell ya.

Pat, sweetie, you're forty-one. You wear it well. Just say no.

And the Dynamo have several injuries, plus several out suspended, including both of their central defenders. Of note is that new Dynamo player and former USL Sounder Cam Weaver will be out with a groin injury. (And I must be becoming more mature, completely against my will, because I can type out that phrase and not even snicker.)

But anyhoo. This is good news, because since appearing in Orange, Cam Weaver has done nothing but score. I don't know what it is about the Houston air, but it seems to be really good for strikers. They come in and BAM. Goals all over the place.

So Cam, I am sorry you have injured your groin. (Okay, just testing. Still snicker-free. Damn.) Feel free to feel better after we play your team in the USOC on the 25th.

And lastly, anybody going to the game needs to read this warning from Houston Offside. I believe he may have a point.

And that's all I have to say about Houston. Go Sounders!

(Oh, and also? Houston is not all hot, humid wasteland. It also has the best blogger ever: The Bloggess. And now you're hooked. You're welcome.)