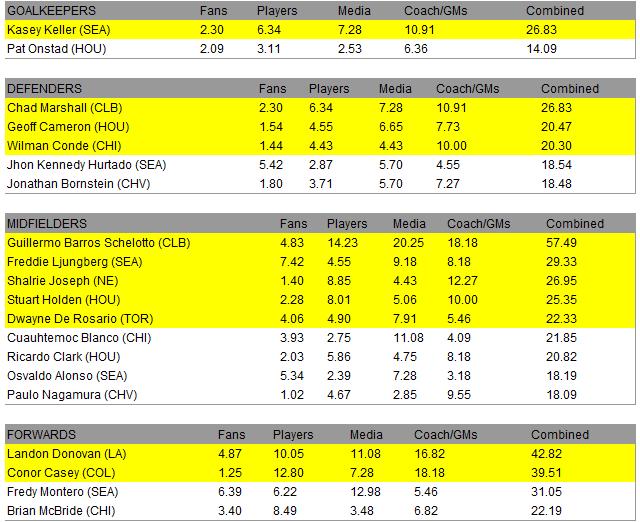 Above are the MLS All-Star voting results, courtesy of MLSnet. As you can see, fan voting accounted for essentially squat-all.

Freddie Ljungberg and Kasey Keller made the All Star XI, as voted on by fans, coaches/GMs, players and media -- each group getting 25% of the vote. Hurtado, Alonso and Montero were close but not quite.

Yes, I think we got 8 players in the top 11 in the fan vote, but the problem with this is that the fan vote is dispersed much more widely. No player got more than 7.42% of the vote. (That would be Freddie.) The average for the winners was more along the lines of 2-3%. Players, media and coaches/GMs seemed to hone in a lot more on specific players, giving the winners of these votes a higher percentage.

This happened last year for Toronto FC; they had six players as the top vote-getters in the fan vote, but precisely zero in the XI. The coach later picked Jim Brennan as one of his choices, probably to stay in their good graces, given that Toronot hosted last year. (I have a post on this topic, including the final XI, up on our main page if you want more on this.)

Of particular interest is the Montero vote, where media and coaches/GMs disagreed in a big way.

And the players and coaches/GMs are all huggy-kissy with Conor Casey, but the fans and media are just so-so on him. And yet he's in and Montero's not.

Of course, this isn't the end. The All Star coach, Dominic Kinnear, gets five picks, and the commissioner gets two. I expect one of these to be Blanco, because he's a DP and was close in the voting, and one to be somebody from Salt Lake, since they're hosting. After that I wouldn't be surprised to see at least one of Montero, Hurtado and/or Alonso. Probably Montero, unless Kinnear is still ticked about Saturday's goal.

Or not. What do you think?