Jarrod Smith Limps Off Into the Sunset

Share All sharing options for: Jarrod Smith Limps Off Into the Sunset 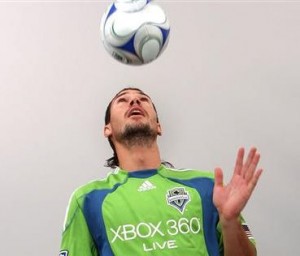 Sadly, Jarrod Smith, our más guapo guy of the Confederations Cup, is a Sounder no more.

(Oh, hey, did I mention I just finished "The Beckham Experiment"? My review is here. And be sure to read through the comments, because my attitude changed after his press conference yesterday. Let's just say that the initials DB now stand for something else entirely.)

But back to Smith. From the press release:

Smith’s release creates an opening on the Sounders FC roster.

Smith underwent successful surgery last week to repair a torn right hamstring tendon. He will continue rehabilitation in Seattle with the team and his MLS rights remain with Sounders FC.

We'll take their word for it, but since he was already on the DL, I'm not sure how this frees up a roster spot. Anybody? I also don't know if he was one of the two whose contract the team was allowed to not guarantee after the official "contract guarantee date," but I would guess so. So that would free up a teensy bit of cap space. Like $37,800.

Also, didn't MLS used to have rules against releasing longterm disabled players? Or am I delusional?

Best of luck, Jarrod. Hope you land on your feet.