Ten Things We Learned in the Portland-Seattle USOC Game

Share All sharing options for: Ten Things We Learned in the Portland-Seattle USOC Game

10. Blatant time-wasting is just as embarrassing when we do it.

Seriously, Sanna? What. The. Hell?

If you're a parent, you were watching this last night and being reminded of the first time your little darling did something like bite a playmate. You look at those little teeth as they chomp down and you think, "But...but...but... My child doesn't DO that!!!"

Apparently he does. For long periods of time. (Seriously, it was like he was parodying -- or channeling -- Ekpo from the Columbus game.)

(But that doesn't make throwing objects at a downed player any less classless, Portland fans.)

Does anybody know the full story here? It felt out of character, especially given what a fantastic game Nyassi had otherwise. This, and the referee's response to it, were just...bizarre.

9. This would be called a "seriously bad day": 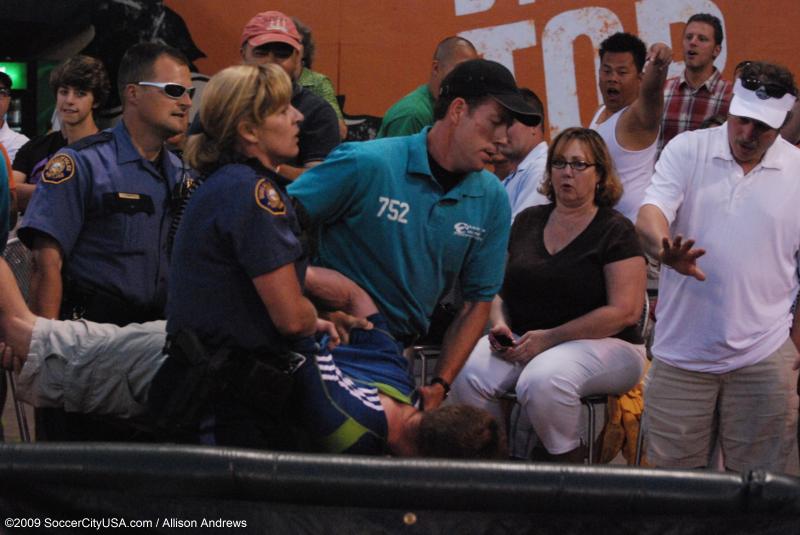 As far as I've heard, this was the only arrest, though. Not bad, people.

8. Portland fans on their best behavior are not that bad.

All eyes were on them yesterday, and the MLS deal is not a sure thing. Hats off to the FO for communicating that fan behavior mattered.

From a Timbers fan over on the Goal Seattle boards.

On a note of fan behavior, we were given explicit, and I mean explicit instructions from the FO, Merritt, and many other Timbers staff to keep it civil. With that, many of the TA got that message, and really focused on keeping things under control. Our MLS deal is still not certain, and we all know that. The Sounder fans were treated extremely well, but it's not like we had a choice. A riot, or big fight breaking out would have made headlines in Portland, and would have destroyed our MLS deal. Am I saying it should always be this way? Well sure. But I am a realist, and with a rivalry like this, it can obviously get very heated. I had to restrain my two buddies, literally, after Sounder fans talked mad shit to right to their faces. I had to quickly grab both their shirts, then their necks. In the future will I have such urgency to restrain them? Who knows? I am one for, if you talk, back it up. But I knew I had to do it that day, and so did the rest of the TA. Sounder fans were treated golden yesterday, but for a reason.

However, it was great to see the support for both sides, I have a feeling when Portland enters MLS, it will make for even more amazing games.

As a guy with roots in both cities, you can tell he really wants to be a part of this in 2011. And he needs to be. Who says a 41-year-old keeper can't still be at the top of his game?

6. Roger Levesque. Sticking it to Portland fans since 2003.

Well done yet again, Roger. We love you. Stick around awhile.

(Also, Roger's Wikipedia profile does not have a photo. Surely somebody here has a non-copyrighted one they'd be willing to share?)

If Alonso doesn't get better before the Houston game and Marshall is still in the Gold Cup (causing Ianni to continue to play central defense), I am afraid.

That said, King's opportunistic goal was sa-weet. You won it for us, dude. Well done.

This time they jack with their arch rivals Portland.

This Seattle team never ceases to amaze me.

Just how well run is Seatlle? They “forgot” to bring their blue jerseys to their US Open Cup game with arch rival Portland and forced the Timbers into wearing their road kits at home.

See, before the game Seattle said they would play in green/blue/green and that Portland would be in their all green. Apparently Seattle felt the two greens were different enough. But of course that is up to the referee.

So when Seattle gets to Portland, and (I assume) the referee decides green is green and Seattle needs to wear their blue top…

Seattle has “forgotten” to bring their blue tops even though they were asked to.

…And Portland has to change into their road black at home.

And it ends with:

What don’t these guys get right? Please somebody help me find something Seattle has gotten wrong.

3. The difference between a motivated USL-1 squad and an MLS's B+ side is not that huge.

We dominated for periods, but the second half was remarkably even. (I was surprised at how easily the Sounders got sucked into hardscrabble, non-technical longball.)

That said? We won. That's what counts.

I was thrilled every time the flag went up on Keita. Much less so when it went up on what would have been our third goal by Jaqua. Especially since I never saw a replay angle that made him look even remotely off. If Portland had equalized with a second goal, there would have been some seriously pissed off Seattle fans.

Fortunately this was not an issue.

1. Portland needs to hurry up and get a stadium financing deal, because this is gonna be a kick-ass rivalry.

They have only till Sept. 1, or MLS yanks the franchise. How anticlimactic would that be?

LATE ADD: 1+++. All those traveling fans

Don't know how I forgot this one! Buses and buses of fans in rave green! (And the occasional Sounders blue, like our unfortunate friend in the above picture.) How wonderful is it that Sounders fans no longer have to sit and take the "your team support sucks" argument?