So Why Doesn't Our New Costa Rican Leftback Have a Wiki Page in Spanish?

Share All sharing options for: So Why Doesn't Our New Costa Rican Leftback Have a Wiki Page in Spanish? 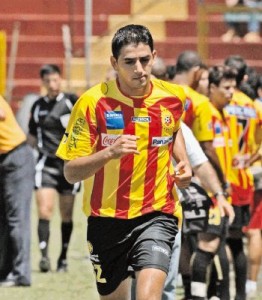 As Steve says up above, ^^^Leonardo González, welcome to the Sounders!

He'll start after they take care of the International Clearance thing (whatever the hell that is) and the work permit thing. Oh, and that pesky Gold Cup thing.

Based on how badly Costa Rica kicked the United States' guys' collective heinies recently, my guess is he'll be occupied up to the bitter end, which would be July 26. Although according to FIFA records, it doesn't look like he was a part of that Costa Rica-US qualifier. Which is kind of too bad, because those guys were good.

But if he's playing the Gold Cup, he has to be good too, right? Plus, given our FO's success in discovering amazing foreign players, I'm qute hopeful that our one big question mark in the lineup, leftback, has been taken care of.

(Zach and Tyson, we still love you.)

And more good news is that he can also play centerback, which should relieve some pressure on Tyrone Marshall's 34-year-old bod.

And now that we've dispensed with the basics, here's what really puzzles me about our new guy: The list of languages his Wiki page has been translated into.

So basically we have German, French, Indonesian, Italian, Dutch, Polish, and "Suomi," whatever the hell that is.*

But no Spanish. Seriously. Somebody want to explain this to me?

I am so disillusioned. I thought Wikipedia ruled the universe.

*Of course I couldn't not look this up. It's actually Finnish. Because that's exactly one of the languages I would have imagined would take precedence over Spanish.