Catching Up: More All Stars, Montero to Fulham (Or NOT), Hanauer's Biggest Payne and Other Fun Stuff

Share All sharing options for: Catching Up: More All Stars, Montero to Fulham (Or NOT), Hanauer's Biggest Payne and Other Fun Stuff 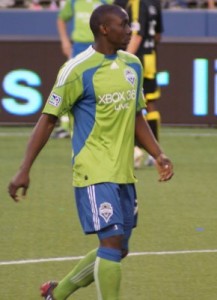 The toughest part about blogging is trying to decide what to write about when you've been gone. Do you try to catch up on everything, or just pretend it never happened (or that everybody's read it elsewhere) and start fresh?

I've had to use my blogging time this week over on the main page to fill in for Chris's vacation, and Steve is getting ready for grad school (awww! I remember grad school!) so forgive us for what we've missed. I think I'll do a quick catch-up post here and then we'll talk about tomorrow's Chicago game.

First, we have more All-Stars! Fredy Montero and Jhon Kennedy Hurtado were two of coach Dominic Kinnear's five picks to take on Everton next week. Both very deserving. I'm especially happy about Hurtado, both because he's amazing and also because central defenders not named John Terry rarely get any love in the press. Well done, Jhon. And you even managed to make the news without peeing on any bar floors.

Next up. Fredy's going to EPL club Fulham, right? Everybody says so. Well, okay, the British tabloids all say so. And Sky Sports had an actual interview where he pretty much says he's going, so it must be true.

Except not so fast. In the Times this morning, Jose Romero has an interview where Fredy says that no, he has not talked to Fulham. And he's oh-so-happy here. Not leaving. Not at all. (Plus let's not even talk about how hard it would be for a not-fullfledged international to get a work permit in England.)

So is Fredy going? Well, sure. Of course he is. He's good, he's 21, and he could make a LOT more money elsewhere. Maybe he won't go to Fulham, but he will go somewhere. Eventually. (You don't expect him to stick around in MLS forever, do you?)

But he's not going YET. And with luck, by the time he does go our amazing talent scouts will have traveled to the corners of the earth and come up with a good replacement.

Yesterday Payne shot back at the upstarts. Causing Seattle to point out that... Let's see, Kevin, WHO has the longer soccer history? Not DC.

There's a lot I could say here, but David Falk has already said it better over at Seattle Soccer Examiner, so go read that. (Plus David gets paid by the pageview, which helps fund our wonderful GoalSeattle community, so you should be going there anyway.)

Also be sure check out this somewhat more non-partisan post over at MLS Rumors about how this is good for MLS. (Because aren't we all sick of David Beckham being the only good controversy? Not that he's not still an @#%$^&*)

Oh, last thing. ProstAmerika has an interesting interview with Chelsea player Michael Ballack. Important point: Michael's not ruling out MLS, but, y'know, he's ONLY 32. Maybe in a few years. When he's done playing at "the high level."

(Because the MLS physical style is GREAT for the 40-year-old bod, Michael! Come on over when you're really old! You'll have fun! We swear!)

And that's it for the recap. Come back later for Chicago stuff.