Are You Going to the Gold Cup Game? Why the Hell Not? (UPDATED with link to win tickets)

Share All sharing options for: Are You Going to the Gold Cup Game? Why the Hell Not? (UPDATED with link to win tickets) 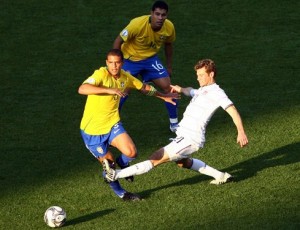 So our US men are here tomorrow, playing in their first match after that amazing Confederations Cup run where they beat the #1 team in the world, Spain, in the semis and then came oh-so-close to beating Brazil and taking it all.

Yes, here. Right here in Seattle, at our very own Qwest field, the site that has broken all attendance records for MLS. So they should be sold out, right?

Wrong. Last I heard, they'd sold only 8,000 tickets. USL Sounders sold more for their USOC semifinal a couple of years ago. Yes, USL. And our USL attendance generally sucked.

This is, sadly, almost always a problem for the US National Team, except when they play countries like Mexico in a border state, where the majority of fans are cheering for the other team.

I have to believe we can do better.

Okay, yes, I know that the biggest stars of the Confed Cup have been allowed to go home, so no Landon Donovan. (Although they've expanded the roster to 30, which means guys like Charlie Davies and Jozy Altidore should be there.) And I know it's just Grenada. And I know the timing is awkward -- the US men are playing at 6:00, which is both too early and too late.

But still, you'll be done before 8:30. Which gives you plenty of time to get out and go lie on the grass in a beer-induced haze for the several hours it takes you to realize that Ivar's isn't doing a fireworks show this year.

(I know, right? Sucks. I have wonderful memories from a few years back of oohing and aahing in Myrtle Edwards Park while sharing our pizza with some homeless guy. True story.)

But anyhoo. It's not just the US Men, it's a double-header! So not only can you see US vs. Grenada, you can show up at 4:00 and see Honduras vs. Haiti! Four hours of entertainment, with cheap seats still available. I'm sure they'll be selling tickets at the gate, and the weather is supposed to be gorgeous. Plus: Brad Evans is on the roster. Our Brad Evans.

(You know. The CosmoGirl "Hottie"? Yeah. That Brad Evans.)

So come on, people. What better way to show our patriotism than by cheering our US boys in their first game back in this hemisphere?

Come on. You know you want to.

UPDATE: Steve at Prost Amerika has five pairs of tickets to give away. So now you can't even use "I can't afford it" as an excuse. Because it doesn't get any cheaper than "free."