Brad Gets Capped, OR: Our Mr. Evans is Officially a Nat

Share All sharing options for: Brad Gets Capped, OR: Our Mr. Evans is Officially a Nat 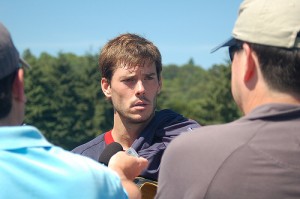 It's official: Brad Evans is now a full US international player.

(I'll give you a moment to let the cheering subside.)

Our Brad got subbed into the Gold Cup game yesterday against Grenada and made his first appearance as a full-fledged senior national. And not only that, he did it in front of his home crowd, who cheered raucously every time he touched the ball. (Which seemed to throw him off a bit at first. But he got used to it.)

We were at the game with friends who had never seen a soccer match before, and even they were really getting into the "cheer for Brad" thing.

Nice work, Brad. You may have just created some fans for life. We could use a few more of those. Especially for the USMNT.

Despite the fact that this was pretty much the B team, the game was an easy 4-0 win for the US, with goals by essentially everybody. (Okay, technically Freddy Adu, Stuart Holden, Robbie Rogers and Charlie Davies. In case you keep score like I do, that's 50% MLS.)

Interesting part is that our midfielder Brad played rightback, subbing in for Steve Cherundolo. He didn't have a whole lot to do, given that most of the attacks came up the left and Hearth Pearce seemed to be the designated go-forward fullback. So Brad spent a fair bit of time hanging out with the central defenders waiting for something interesting to happen. And not much did. I think Troy Perkins had to make maybe one save all game?

But the boys got the job done, and when Brad did go forward he almost got an assist, and he didn't in any way make any screw-ups that would preclude him getting called up in the future. (Okay, sure, he started things off by getting got booked for not waiting long enough to enter the field, but nobody's going to hold that against him.) What more can one ask of one's first game?

Bob Bradley? I think you could do a lot worse.

Also, some fun stuff from an Evans interview by Don Ruiz over at the Sounders Insider blog. Best part:

On if he's ever seen so many empty seats at Qwest:
"Only that one game, the preseason game that was closed. That’s it. It’s definitely the most empty I’ve ever seen it. But overall good support. The crowd was loud and when we needed them behind us they were there."

What's funny is that the crowd was over 15,000, which puts it above the MLS average for the year.

Yes, our boys are spoiled, and we're damn proud of it.

P.S. This is completely irrelevant, but I was just over at the USMNT Wikipedia page, and it tells us that the team's nicknames are: "The Yanks," "The Stars and Stripes," or "The Red, White, and Blue."

Wait, seriously? Has anybody ever heard the team referred to like this in a non-jesting kind of way? This kind of feels like the German National Team, where before every big international competition all of the English-speaking reporters somberly tell us that their nickname is "Die Mannschaft" (translation: "The Team.") Yet our Bundesliga blogger Jan tells me that this is never used by Germans themselves. Except by people who speak English and like naughty-sounding double entendres. (Und here ve haf Michael Ballack, biggest member of Die Mannschaft. Heh heh heh.)