No TV/Video of US Open Cup, and Other USOC News

Share All sharing options for: No TV/Video of US Open Cup, and Other USOC News 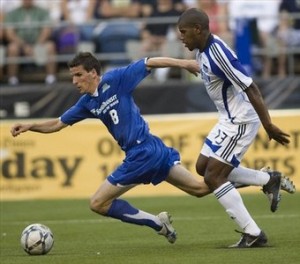 The photo is of the last time Sounders met KC in the Open Cup. Good memories.

There have been very few times this year where I'm not happy with what I get from Sounders. For the most part, every time I find myself thinking, "You know, they really should..." I'll turn around and discover that they have.

This is not one of those times.

The truly bad news for those of us who won't be going to the USOC game against Kansas City tonight: No ability to watch the game, anywhere, TV or computer. The only thing available will be audio coverage through SoundersFC.com.

This is standard for USOC coverage, but still. I have to think the Open Cup people are dropping the ball on this one, especially in the Seattle market.

In other USOC match news, Keller will definitely be in goal. After that, the big decision will be which internationals to play. Presumably because this is the US Open Cup, the number of international players is limited to five. We have seven: Hurtado, Montero, Le Toux, Ljungberg, Nyassi, Smith and Zakuani. Smith is injured, so that leaves six.

Sigi's comments (from the Times blog):

On the five foreign player limit in Open Cup games)
"Well obviously we've got seven, so there are two that we can't play. We'll sort of see where that is. Jarrod Smith is injured right now, so that's obviously one. We wanted to see how Seba (Sebastien Le Toux) was doing. (Freddie) Ljungberg is another one. We'll see probably between Seba and Ljungberg as to who the other one is at this point."

In case you'd forgotten, Le Toux picked up (brace yourself -- this is a technical medical term) "a knock" last week against Portland. And there's something about Ljungberg using this break for fitness or something? (Seriously, I have no idea. Just repeating what I've heard elsewhere because it apparently has something to do with whether or not he'll play tonight. If you know, feel free to clue us in.)

So all I know is that we will see either Seba or Freddie suited up tonight, but probably not both.

Or YOU will see them suited up. I, myself, will be hanging out and trying to figure out the meaning of comments like, "King, up the middle, takes the shot and... OHHH!"