Poll: Is "Embellishment" (or, okay, Diving) Ever All Right?

Share All sharing options for: Poll: Is "Embellishment" (or, okay, Diving) Ever All Right?

To make this a neutral and non-Sounders-oriented post, here's a clip from World Cup 2006 -- a little interchange between Thierry Henry of my beloved Equipe de France (long story, don't ask) and Spain's Carles Puyol.

If you are a France fan like I am, you have spent the last three years desperately trying to defend Henry here and explain his contention that this isn't technically a dive. And probably failing as miserably as I have.

But Henry said: "Spain's left-back Mariano Perina was going to win the ball so I don't know why Puyol cut across me, but he did. I don't cheat."

There's another quote, which I can't find right now, where he also says that this was one of many infractions by Puyol which the referee was not calling. When he challenged the ref over this, he was apparently told, "But you didn't go down."

And so the next time it happened, he did go down. Holding his face. Thus giving France a goal off a free kick, and the above clip, which will forever be the first thing that shows up if you google "Thierry Henry dive."

The issue of diving came up for us on Tuesday in the post-game comments of some of the KC players and coaches after our 89th-minute penalty.

Based on Rick Morrison's photo below, I'm pretty sure what happened on Tuesday night was not a dive. (Some KC fans -- and coaches -- remain unconvinced. You can weigh in on the subject and vote in a poll on this very question over at Seattle Soccer Examiner.) 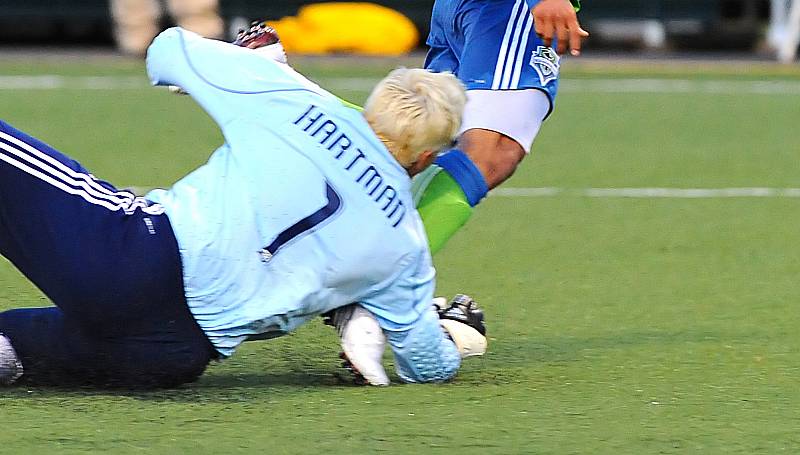 But the thing that interests me about the penalty is that before the photo turned up I was hearing a lot of people say that even if it was a flat-out dive, it was justified because the referee should have given about three other penalties (and countless fouls, plus a few yellows) but didn't.

Which makes me curious. If Thierry Henry, above, was a Sounder, and the game had been miserably refereed the way Tuesday's game was, would this be okay? Or would it be okay regardless of how the rest of the game had played out? Or is a little (or a lot of) embellishment okay, as long as it's not a flat-our dive? Or do you consider this kind of behavior a black mark on the game and always wrong?

Your grandma and your second-grade teacher aren't watching. So tell us how you really feel.

P.S. I'd love for you to tell me in the comments where you think the Henry clip, above, falls on the embellishment vs. dive spectrum.