Share All sharing options for: My Not-Much-of-a-Preview for San Jose-Seattle 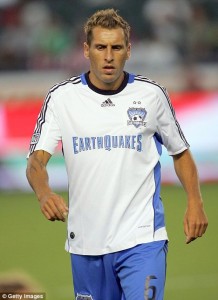 (That photo would be Huckerby, Darren)

So what do you say about a team you've already met and vanquished twice?

A couple of little factoids:

1) San Jose has done some significant beefing up in the transfer period. Their acquisitions include "Former Brazilian international Andre Luiz," who's 34, and Ramon Sanchez from El Salvador, about whom I know essentially nothing except that he's a midfielder who has been capped 52 times, and Frank Yallop thinks he's an improvement over whoever was playing earlier in the season.

These guys worry me a little, given that they're South and Central American internationals. On the other hand, I was a fan of the Galaxy in the Yallop days and saw his acquisitions then. So unless either a) Alexi Lalas was pulling all the transfer and acquisition strings in 2007 or b) somebody else in San Jose was behind these purchases, I still feel much more comfortable with what we get from Adrian and Sigi.

But even a blind squirrel finds a nut once in awhile. So I'm hoping I'm not wrong here.

But here's what I'm not wrong about: Darren Huckerby is healthy again. Okay, so sure, he was healthy in the last Seattle-SanHo game. But that was the one home game I've missed so far and my DVR didn't work, and if I haven't seen the game I don't think it technically counts.

Remember here that Huckerby was MLS Newcomer of the Year in 2008. (Which provided great amusement to Englishman who had witnessed the guy playing in their country since about 1993.) But make no mistake: This guy can be lethal. And San Jose has no plans to suck as badly in the final third of the season as they did in the previous two-thirds.

So come on, Sounders. Pay attention. This may not be as easy as you think, especially since we're missing Freddie.

Also, on a completely irrelevant note, San Jose defender Aaron Pitchkolan will be missing the game with a "Left groin avulsion." I have no idea what that is and am desperately fighting the urge to google, but it certainly gets the award for "Ickiest Sounding Injury Ever in History."

And with, y'know, getting a date.

P.S. Okay, so I had to google it. (You knew I would. I have NO impulse control.) And it's worse than I imagined. According to Wikipedia, an avulsion is:

an injury in which a body structure is forcibly detached. It most commonly refers to a surface trauma where all layers of the skin have been torn away, exposing the underlying structures.