LA Galaxy 0-2 Seattle (Or: WOW! The Rules DO Apply to David Beckham!)

Share All sharing options for: LA Galaxy 0-2 Seattle (Or: WOW! The Rules DO Apply to David Beckham!) 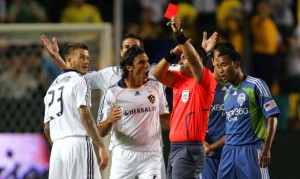 I am taking a longish blogging (slash son getting chemo) break. Truly I am. Except that I am just bubbling over with a need to talk about last night's game, so I figure it's best to just blog it all out and be done with it.

Must confess here that I was not able to watch the game as it was happening. Not that I was doing anything more important. Just that I could not take it if they'd played another game like last week. So I hit "record" and took the dog for a walk and timed it so I would not be back at the house until 10:01. Then I went immediately to MLSnet to find the score. And only then did I watch the game.

Okay, yeah, so this probably makes me a coward. But it's been a rough week. Which somehow the win makes all (or almost all) better. Funny how that works, isn't it?

I've watched the Eddie Lewis red card sequence several times now, and here is my interpretation of the thoughts that must have run through James' head:

Thought one: "Hey! That guy just elbowed me in the back of the head! Twice!"
Thought two: "Damn! That freakin' hurt!"
Thought three: "I am not doing my team any favors by manning it out and staying on my feet here. OW!!! Can't...walk! Legs...buckling!"

Pretty sure that every single boo afterwards just reinforced the wisdom of his choices.

Also: how...symmetrical was it that the red card came against the Galaxy? The only thing better would have been if it had been Gregg Berhalter rather than Eddie Lewis. I love James Riley.

(Wait, maybe I said that already.)

Also: The David Beckham red. Was anybody else shocked! SHOCKED!! to discover that MLS rules actually apply to David Beckham? I thought there was a special double-super-secret set of David Beckham rules, which started out with "The Beckham shall NEVER receive a red card."

Apparently I was wrong. Thank you, jeebus. (And thank you, Ricardo Salazar.)

What's funny is that in Becks' post-game presser he protested his innocence, saying that he didn't deserve the red because this was in no way malicious. Which is kind of funny, because if he'd been paying attention at all to MLS (which he obviously has not, being far too busy with AC Milan and England to spare a thought for our little bush league that's paying him $6.5m a year), he would know that malicious intent is not a factor in awarding red cards. It's a bit more about punishing recklessness that could break legs.

Or, in other words: Sucks to be you this week, David.

The best part about this is that Beckham and Lewis will now be missing for their midweek game against Chicago, which we really need LA to lose to help us in our quest for a playoff spot. Not that I'm in any way feeling an emotion as base as schadenfreude. Or anything.

Okay, I'm done now. Crawling back into my isolationist hole.