A God Among Men

Share All sharing options for: A God Among Men 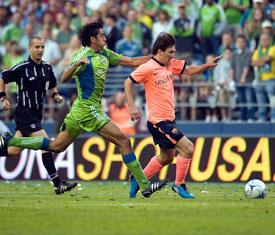 Leandro Gonzalez showed last night that he is exactly what the Sounders expected him to be: fast, good on the ball and able to contribute on attack from the back four. For all his speed and quickness, he still seemed to be in one place the whole game... two steps behind Messi.

In front of a packed and energetic crowd at QWest, the little one know as Leo, La Pulga, La Pulga Atomica or La Messiah quite literally ran circles around Sounder's defenders until pretty much all they could do was throw their hands up in exasperation.

Mercifully, both for the Sounders and Messi, who has along season ahead of him in La Liga, Champions League, and rescuing the Argentine national team from the brink of missing the 2010 World Cup, he sat down after 45 minutes to clear way for the reserves. Barca's second team then proceeded to give Seattle's reserves fits, who seemed utterly impotent against a superior side. 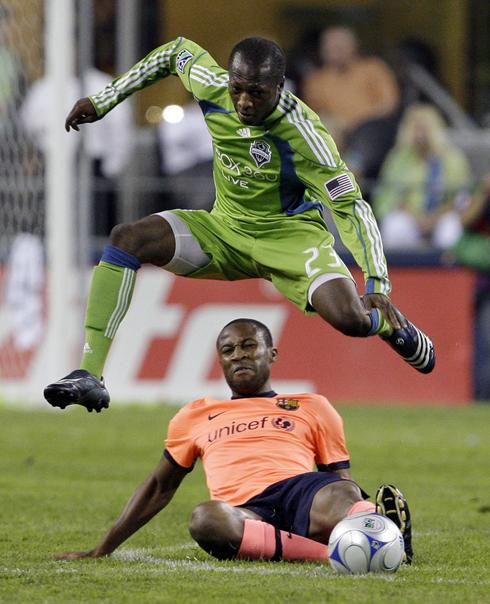 So, yet another exhibition against a European side ends in a defeat, but at least we can take a few things away from this one.

First, Freddie Ljungberg might not be able to shoot. I still can't believe he missed that... I still can't, then again, thinking back how many times has Freddie jumped at open opportunities this year. It seems like with all his blistering runs, he should have a few more goals. Does he just not have it in front of the goal like he does running down the sidelines?

Second, Gonzalez overlapping Zakuani >(x1000) Wahl overlapping Zakuani. This may be the difference-maker of an above average inaugural season and bringing home the championship in front of the home fans at QWest. Gonzalez is fast, and not only will it take pressure off of Zakuani on the left flank, but it will give opposing defenses (at least MLS ones) huge, painful, Ljungberg-migraine-like headaches. Kudos to Seattle's scouting and personnel department for bringing this guy in, we just got a lot better.

Finally, and slightly unrelated, Rafael Marquez, defender for the Mexican national team was injured training at QWest field and will miss the August 12th qualifier at Azteca. The loss of their captain and arguably best (or only good) defender, Mexico's shockingly zealous overconfidence after thumping the USA-C team 5-0, and the return of team A into the foray, I see a perfect storm brewing for a huge upset. I am calling it right now, team USA wins for the first time ever in Mexico D.F., 2-1.

Have a nice day.