Poll: Are You Secretly (or not-so-secretly) Relieved that Nate Jaqua's Suspended This Weekend?

Share All sharing options for: Poll: Are You Secretly (or not-so-secretly) Relieved that Nate Jaqua's Suspended This Weekend? 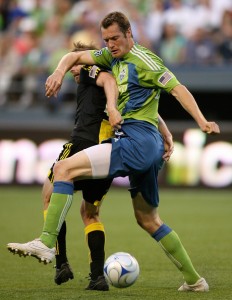 Now that Fredy Montero has found his form again and Leo Gonzalez has taken over at leftback, there are really only two candidates for "Most Controversial Player": Nate Jaqua and Pete Vagenas.

We'll save Pete for another time.** Let's talk about Jaqua.

On the one hand, he's 6'4", yet he doesn't play that way. He's not good with his head. His first touch is abysmal. He's not fast. (How many times this year have we seen a pass sail harmlessly past him and over the line and thought [speedy player of your choice] could have gotten to that? A lot.)

On the other hand, seven goals. Seven assists. That's nothing to sneeze at, especially when we're suffering a goal-scoring drought. And if it weren't for Nate-and-the-bloody-bandage and his late-game semi-final goal, we never would have beaten Houston in the USOC and moved onto the final. Plus, on a team that can be a bit passive and naive about the physical play of MLS... Well, let's just say that Nate is in touch with his inner thug. And that's not necessarily a bad thing. (Think: the horse-collar tackle in Toronto, which, fortunately, the referee did not see.)

There are more arguments both for and against, but listing them is not going to change anyone's mind. You're either sold on Jaqua or you're not. And whenever Nate is healthy and available, Sigi seems to need to put him on the field, so you can be pretty sure that if he weren't suspended, he'd be playing.

So 'fess up here: Are you relieved that Nate will be suspended this week and therefore not playing, or are you heartbroken that he won't be on the field?

**Although I do need to say this about Pete: Come ON, people, somebody make a bid! The "zero" under bid number is causing me great pain in my maternal area!