Share All sharing options for: "And Then His Career Was Tragically Cut Short by a Falling Iguana" 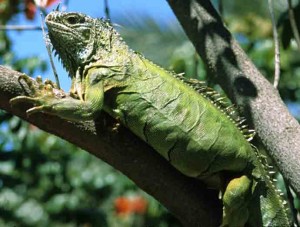 Less than two days left in the 2010 MLS Combine, and I am thrilled to report that up to this point nobody has been killed or injured by falling iguanas.

Contrary to what you might be thinking, this is neither an imaginary threat nor a reaction to combining medications. (As you would know if you followed me on Twitter. Which you should.)

According to the Seattle Times:

It was so cold in Florida, freezing iguanas were seen falling out of trees

(And I forgot to get a link when I first posted that quote, which just resulted in probably the best google search ever. I even found video. Which is sadly not nearly as exciting as I had hoped, so just trust me here. The threat is real.)

Normally in cases like this I would say, "Hahaha! Silly Floridians!" But not this week. This week we ourselves have cause for worry. Because this is the week of the MLS Combine -- the time when our scouts go to Florida to check out the best and brightest of the players aspiring to join MLS.

What this means is that it's not only some of our best and brightest future US stars at risk. It's also pretty much our entire coaching and scouting staff: Adrian Hanauer, Chris Henderson, Sigi Schmid, Brian Schmetzer, Ezra Hendrickson, Tom Dutra, David Tenney and Kurt Schmid. That's like our entire Sounders brain trust, needlessly exposed to risk.

The United States has taken steps to ameliorate the effect of this kind of threat. I think we should too. You know how the President and Vice President can never fly in the same plane? I believe we need to implement a similar rule for dealing with iguana threats: at least one must stay behind.

It's truly the only rational response, and I will be talking to my Alliance Council members immediately.

Fortunately, though, the guys seem to have survived the first few days without iguana incident, and the Combine ends tomorrow. If only our luck will hold, I will never have to post a headline like, "And Then His Career Was Tragically Cut Short by a Falling Iguana."

Damn, I love being part of the non-truth-based alternative media.

P.S. If you are at all tempted to tell me anything along the lines of "But the cold snap ended days ago," or "And it's being held FAR from any iguana habitat"? You can just shut up now.

It is the off-season. I need to take my tiny amusements where I can find them.