More Than You Ever Wanted to Know About The Offside Rule

Share All sharing options for: More Than You Ever Wanted to Know About The Offside Rule

I'm getting a lot of questions about the offside trap lately, so I thought I'd write a primer. It has to be useful to someone, right?

The Offside Rule
The offside rule attempts to prevent soccer from descending into a game of long punts towards crowds of players milling bout the goal, as is essentially equivalent to American Football's strict rules on the forward pass. In the current interpretation of the laws of the game, a player is offside at the instant a ball is played towards him as long as the following conditions are met:

The last item is clearly the most important in limiting the attacking player, forcing an attack to be constructed in the space in front of the last defender. The rule is often misstated as one defender and the goalkeeper, which quite isn't true - the goalie can be up the field and there still must be two defenders between a striker and the goal (granted, this is not exactly a frequent occurrence). The 'actively interfering' part is a bit trickier, and FIFA keeps changing their minds on what it means, but basically you become active if you touch the ball, screen a player, or present them with difficulty in some other way. Unactivated players must wait until the ball is played by an onside player before returning to the play (no sneaking back onside and then playing the ball!). These are clearly the two most confusing parts of the rule, so here's a picture to play with: 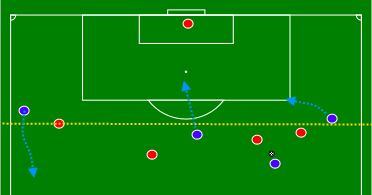 In this case, there are two blue attackers in an offside position, with the transverse line defined by the position of the red right-back. A pass to either player on the flank would be illegal. It's entirely possible that a pass to the player in the center would be illegal too, if the blue right winger attempts to draw the red LCB wide by making a run. It's unlikely that the left wing will contrive to actively interfere with play, so that's not a worry. Note that the ball can be played anywhere so long as the player receiving the ball starts in an onside position - it's perfectly reasonable for the ball carrier to chip the ball onto the penalty spot for the central attacker to receive on the run, so long as neither of the two offside players interferes with play. Once the ball is touched by the onside player, assuming that he is the most advanced player on the pitch, everyone becomes onside (so, if the defence was static, blue would be two-on-one with the goalkeeper). Clear as mud? Good.

There are a couple of other points to note about the rules. The first item is to ensure that silly mistakes by defenders are not covered by the offside law. Deflections do not count as changes of possession for our purposes - the ball must be deliberately kicked. The second item exists to stop the offside rule being used as a means of prolonging an attack: If the rule applied in the opposing half as well, it would be possible to pen up the entire team inside their penalty area, which is clearly outside the intent of the law. The third means that an offensive player can always play the ball laterally or backwards, even to a player who'd otherwise be offside (this would occur in the two-on-one possibility from Figure 1), and also means that it's physically impossible to be offside on a corner kick. The fourth means it's impossible to be offside on throw ins, which raises some interesting possibilities. I don't really get the point of the goal kick rule, but whatever.

With the law itself out of the way, it's instructive to see how it's evolved, and how different forms of offside have changed the sport.

As many of you know, 'football' was adapted in mid 1800s England from a sport that is best described as a minor war between neighbouring villages. Private schools considered it desirable to insert sport into their curriculum in order to ensure that their students grew up stout of heart and strong of limb (and preferably small of brain) - the very ideals of Victorian Englishness. A number of these schools started with the village game and adapted them to suit their needs, and no two school played exactly the same 'football'. The offside problem was a major issue, because without it or a similar rule the most efficient way of playing was... boring.

Rugby's football handled the situation by outlawing any forward pass. Sheffield's ignored it entirely for a while. A number of other schools had some form of soccer's offside rule in place. It's interesting that the split between rugby and soccer had begun before the outlawing of handling the ball in association football, although there was already cultural differences in terms of whether the game was played primarily with the hands or with the feet. Eton liked dribbling, Marlborough the catch-and-run. There was no concrete set of rules, though, which made competitions between schools problematic. This came to a head after the young men of the public schools became students at Britain's universities, where games became a farce, with everyone playing by whatever rules that they had been taught. At Cambridge, after several brawls erupted as a result of contested football matches, a number of students who had played for different schools eventually codified a set of a compromise set of laws for their football club. The Cambridge Rules became the first set of laws for the national Football Association. The offside law required three defenders be between the attacker and the goal, making it far more conservative than our modern rule.

Three changed to two in the early 1900s as a result of the desire to increase scoring in matches. With three defenders required in front of an attacker in order to maintain an onside position, it was almost impossible to play a ball forward through the defence to put a player one-on-one with goal. If a run beat one defender, the other could mop up before the keeper needed troubling. There's no such safety net with a two-defender version of the offside law, and scoring went up by 35% the year it was adopted. One more tweak was made fairly recently in that attacking players are allowed to start from a position parallel to the last defender, another move designed to swing the balance in the favour of offence. Although it seems unlikely that further changes will be made in the near future, but there's always experimentation of some sort going on, and I wouldn't be too surprised to see the offside rule applied to throw ins fairly soon (see below).

There are a number of implications to the offside rule. From the attacking point of view, time a run or a pass becomes vitally important, because success means going clean through on goal and failure means awarding possession to the defence. Passes are timed so that the attacking player is running at full sprint through the offside line at precisely the moment that the ball leaves their teammate's foot in order to blow through the defence and beat the goalkeeper to a through ball using the striker's speed. Naturally, the defenders are disinclined to let this happened.

The defensive response to the offside law is primarily one of coordination. The defence needs to know where its offside line is and how to push it up and down the pitch, and failure to communicate across the back four will result in gaping holes appearing for strikers to exploit. Communication is key (which is one of the reasons centre-backs shout so much). Ideally, the perfect defence would be able to stay in midfield and limit the amount of space available to attack into, but this is a risky proposition. Forwards are almost always faster than defenders, so playing a high line means that there's an area where the defenders can't reasonably get back to and the goalkeeper can't retrieve, but where a striker running through the defensive line can receive the ball. This is bad news (or very good news, if one is a striker). Normally a faster defence is capable of forming its line higher up the pitch, and the Sounder defence is quick enough that they tend to play fairly high.

Another technique, and the one which caused me to write goodness knows how much on the offside law, is the offside trap, designed to disrupt the perfect timing sought by the passer/receiver attacking combination. At the moment of the pass, the defence steps forward in unison. Suddenly, the receiving player, despite all the efforts to time his run properly, is offside by a yard, and the defence retrieves the ball. This is beautiful to see when it works, but when it's mistimed (or when a full-back fails to notice what's going on), things get nasty again for the defence as once more you have a striker clean through on goal.

The last implication of the offside rule is more of a curiousity than anything currently used in MLS - it actually allows throwing the ball to be used as an offensive technique. As there is no requirement to be onside during a throw in, players can pack the box, causing defenders to track back and jam the penalty area still further. This causes chaos, as the ball may then thrown in quite fast from above the head (no arc is required like in a cross or a corner), and it's very difficult to defend. Rory Delap of Stoke City has become a feared offensive weapon in the Premier League simply because he's very good at pelting the penalty area with fast long throws. I'm not sure if this technique will ever become more widespread, though - there's no good reason for the offside rule not to apply to throw ins, and the idea of a thrown forward pass being a potent threat seems rather counter to the rest of the laws of the game. But it's cool, and that's what counts, right?

So, that's everything you need to know about the offside law, and plenty you don't.