The big news was of course the Freddie Ljungberg's absence and the statements from Kasey Keller. Keller's words were powerful, and pointed. He's likely the only player that can place those kinds of demands on Ljungberg, and he's the only one that should.

"I don’t know the full story. I’m a player, I’m not in management. … I think when you’re under contract you’re supposed to be where you’re supposed to be for the team that holds your contract. And if something gets worked out, it has to be worked out with the club that holds your contract. You don’t as a player get your choice to say what you’re going to do and how you’re going to do it."

Coach Schmid wanted to focus on the players there, but did have a statement concerning Freddie, who as the DP might get a little special privelage, but not a lot.

"It’s not okay. It’s something that we’ll handle internally as a club in terms of whether there is fines or anything like that. All of them would like to miss a week. We can’t let them all miss a week. So from that standpoint we got to hold them all to a standard."

So, while Freddie is still likely to join the team at a future day, there were 29 men strong there today to start their journey on the 2010 season when four major trophies will be contested (Champions League, Open Cup, Supporters Shield, MLS Cup), as well as a few minor ones as well (La Manga, Western Conference Champions, Heritage Cup).

After some stretching and other warm-ups the team broke up into four groups. The first were those players who would not scrimmage - Steve Zakuani, Peter Vagenas and Nate Jaqua. The rest were seperated into 3 sides of 9 (Ezra Hendrickson filled out one side). 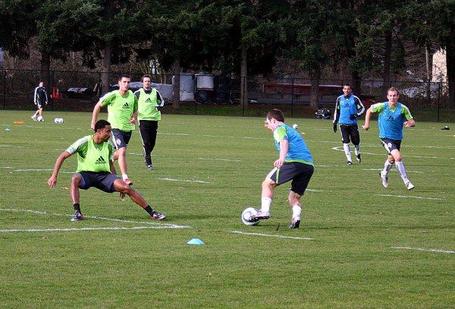 Sadly, this was the first time in a scrimmage where Mike Fucito didn't score. At least of which I know. He did have a diving header saved. 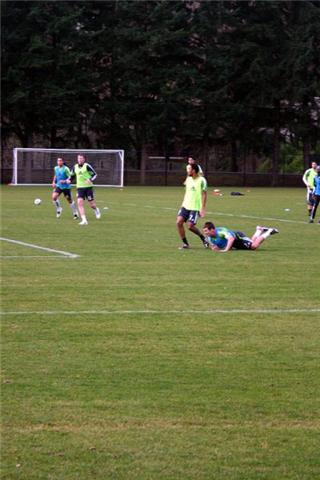 I only have a few thoughts, as this was really the first day back, and so tactics and form weren't necessarily important. For me the most significant thing was that each team broke out into 3 categories - 2009 starters, rotationals/subs, 2010 invitees/draftees.

This wasn't about having a first team, second team, third team, but an opportunity to see how guys work together. It was about building cohesion, and frankly I liked it. Its a solid move early in the season. Maybe later we see a First and Second situation, but right now before the likely cuts prior to the Spain trip, it would be best to build camaraderie.

Also impressive was the sheer amount of media there. 35-40 is a solid guess I my part, some are hard to define, like Matt Gaschk. But overall, the interest level seems high. A few people were like me and took a long lunch to get the access that the team gives to "non-traditional media."

James Riley and Sigi Schmid both talked about the CBA negotiations, and both seemed in high spirits generally, but more importantly the players and the team are acting as if Camp will go on uninterrupted. Frankly, we all should too. First Kick will happen at Qwest as you expect, with you and 31,000 other season ticket holders.

"It’s something we addressed briefly when we spoke to the team. We said we’re proceeding as we planned and if something changes there then we will make alternate arrangements and alternate plans as we need to. But right now, we’re planning to go ahead and go forward as we have already planned it out and had it scheduled. If something changes we’ll have to adjust; that is part of coaching as well… A lot of people have, what is it, twitters or tweeters, blogs and so forth. If I believed everything I read in those things and took them all for a hundred percent I would have a lot more grey hairs than I have right now."

Later tonight I'll get a one-on-one with Taylor Graham and early tomorrow a conversation with Chris Henderson.

PS - Buried by the Ljungberg news was the fact that Fredy Montero was there and trained just like everyone else. If he were on the verge of being transferred he likely would have been jogging or something. Nothing is imminent with him. Oh, and the other Colombian, he played as well.