Share All sharing options for: Sounders FC's Taylor Graham looks to a healthy 2010

Taylor Graham had a rough 2009. Plagued with injuries he mentioned to me at the event the Alliance Council hosted at Elysian Fields during the Supporters Summit that he did not want an off-season. He wanted things to start right then.

That's where our discussion started today.

Dave Clark: How does it feel today, your first day?

Taylor Graham: It feels good. A lot of excitement in the first day, with tackles flying and guys going 100 miles an hour. Like they say its a marathon and not a sprint so I'm trying, and everyone's trying, to just ease their way into it and get to know the personalities.

Everyone is really excited just to be back. It couldn't be a better day...

I interupt. "You and Jarrod were easing your way into it?" 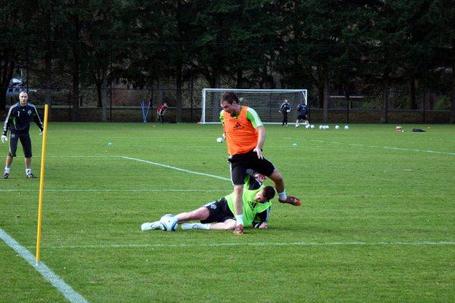 photo by Ron Moran of ECS

DC: How do you feel?

Graham: I feel good. I spent most of the offseason doing some crosstraining. I have some soreness, but not from the injury, just general fatigue. The ups and down of crosstraining building yourself up and breaking it down and building back up.

DC: Is it on odd feeling because you are a veteran with the club, you've been a pro for several years, but at the same point you have a full season with a gap there?

Graham: I think that it is more mental than anything else. I know the guys. I know the personalities, but I feel like I was removed from part of that process not playing. There's been a year hiatus, even though I was here in Seattle. But I'm trying to prove to myself first and everyone else second that I deserve to be out here. I know I can be out here, but be simple and do the things I can do.

DC: Proving to yourself first is that because you hold yourself to a high standard?

Graham: Exactly, because if I don't have confidence in myself who's going to?

DC: Do you have any personal goals for this season?

I'm very realistic in that there's good quality in this organization, and I feel like I can contribute to that quality. Its up to the coaches to see where that comes in.

Thoughts on Taylor Graham's attitude after a lost season?