Share All sharing options for: More on Sigi's Arrow

Let's take a deeper look at Sigi's Arrow. We shall examine my interpretation of the system as the Sounders ended the season, both on offense and defense. How they countered the deep ball, and how they established a bit of width.

Graham calls it a 4-1-Diamond-1, I have called it a 2-3-3-2. Early on I saw a league of MLS' caliber as one that tends to use four band systems, because there are so many specialists, and due to pace at the Forward there must be systems designed for to defend the counter. Four bands also tend to demonstrate the ability of "defensive" players to get into the attack as a libero, CDM, or wingback they all get forward a bit and this should be recognized. 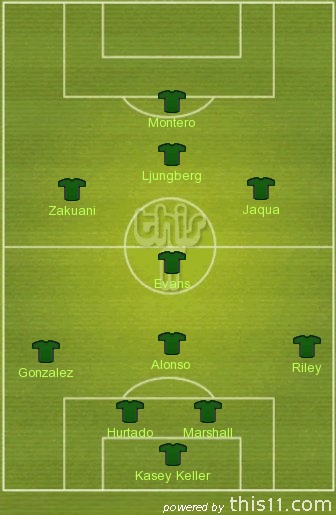 I put the two wingbacks (Gonzalez and Riley) nearly as forward as Alonso because they do enter the attack quite a bit. Usually only when the ball comes up on their side, as you will rarely see them receive a switch when running up the far side. Sometimes they will come up though when the ball advances centrally, but only if both Central Midfielders stay back with Alonso and Hurtado shifting wider to prevent a counter.

That's a first key. In nearly all circumstances there will remain two layers of defense with four players back ready for the counter. Marshall or Alonso will tend to be the player that wins that first ball depending on depth, while Hurtado and one of Riley, Gonzalez or Evans will snag that second ball.

Depending on where and how the ball comes up the pitch in a build-up mode the formation can collapse with at least 6 and up to 9 behind the ball. One of the Freddayain will always be advanced and ready for the outlet. Often you will see the attacking midfielders (Zakuani, Ljungberg and Jaqua) act as harriers not allowing the opposition time to patiently advance the ball.

Offensively the point of the arrow does not act as a target - not as a conventional target, nor as a holding forward with their back to the goal. They are there for an outlet, or to slowly advance the ball waiting for runs off of their forward facing position. For this reason it is key that the Sounders most forward player (I still use TF for designation) must have above average passing skills and vision.

Wide play is provided by either the wingbacks or by the wide midfielders but is not of the booming cross variety regardless of the side of pitch. Instead the team prefers low threaded passes or diagonal runs into the box by the player with the ball.

This does tend to lead to a clogged 18-yard box, and the passing up of many shots by the attacking midfielders, though it does lead to late run opportunities by the central midfielders particularly the man in Evans position. That clogged box also leads to improper shot selection, almost a refusal to shoot due to worry about a wasted shot OFF goal.

While it is generally not preferable to take shots that don't challenge a keeper, the Sounders need to be more aggressive in their shooting. A shot blocked by a centerback throwing their body to the carpet is a perfect opportunity for a rebounded garbage goal.

Sigi seemed to me to put the philosophy in place overtime, but it counts on the ability of the CDM, CM and CAM/WF to all work as pivots in play at various points in ball advancement. This allows Sounder to switch the flow by either the long aerial pass, or through a pivot. It also lets the pivot work the ball in three advancing directions as there are available passes forward, up-left and up-right.

To sum up: the formation uses a triple pivot, short rapid passing and multiple threats in the box while allowing for depth in defense against the counter as well as harrying players available to interupt the lateral pass or patient dribbler.