Parity: What Is It And How Much Is Right? (Part 1)

Share All sharing options for: Parity: What Is It And How Much Is Right? (Part 1)

I was fortunate enough in my early career in the NFL to work for Pete Rozelle and then to continue working for over a decade for Paul Tagliabue. And I believe the NFL is the most popular league in the world for a reason. And that’s that every fan knows at the beginning of the season that their team has a chance to go to the Super Bowl.
- Don Garber

Any discussion about league quality will eventually come around to the topic of parity. Parity is considered an essential feature of a league that can attract and keep the fans it needs to grow. The NFL is lauded for its parity, the Premier League is castigated for its lack of parity, and MLB perennially frets about its widening gap between the haves and the have-nots. And as a relatively young league, MLS is also keenly aware of the need for parity.

But lost in these conversations is the question of what exactly defines parity. Can you measure it? How can you tell if it's increasing or decreasing? I'm going to try to answer those questions, including coming up with some definitions of parity and some methods for measuring it. It went a little long, so I'm going to break it up into multiple parts.

The first thing that became apparent when I started the research is that not everyone is talking about the same thing when they talk about parity. In fact, very few people want what I call Perfect Parity — a situation in which each team is equally skillful. In that environment, every contest would be a coin-flip, there would be no favorites or underdogs, and any success would depend on luck. Instead, most fans want to retain a broad spectrum of team quality, from good to bad, but controlled in such a way that bad teams don't have to stay bad for a long time and have a shot at beating a good team on a good day.

The argument that these three kinds of parity are truly distinct and deserve to be examined separately is supported by the fact that a single league may excel at one and be terrible at another. And it shouldn't come as a surprise, because each is determined by completely separate set of rules and regulations, as we'll get into in more detail.

The leagues I'm going to look at are MLS, MLB, the EPL, the NBA, and the NFL. That should be enough diversity to illustrate the different kinds of parity and the different mechanisms leagues use to create it. Doing the calculations for the NHL will be left as an exercise for the reader.

Franchise parity, which is probably the most important kind of parity for a successful league, is governed by the roster management rules of the league. Salary caps, revenue sharing, and amateur drafts are all components that reinforce franchise parity. They're intended to ensure that the 'have-not' franchises — who might be hobbled by a weaker market, lower prestige, or less lucrative media contracts — still have access to quality talent and are still competitive over the long term. Leagues that lack franchise parity have 'dynasties' — teams that dominate for years at a time.

The goal of the project is to come up with a number that is a decent distillation of the amount of parity (or in this case, the amount of each kind of parity) in a league. Fortunately, franchise parity lends itself very easily to numbers. The question is 'how likely is it that a good team will also be a good team next season?'. Numerically, 'how likely is it that a team with a certain winning percentage has a similar winning percentage the next season?'. And that translates to 'How correlated are winning percentages in consecutive seasons?', which is very straightforward. Using the last three full seasons of winning percentage data in each league, I can find the Pearson's correlation of the winning percentages from one season to the next. This conveniently resolves to a number from 0 to 1, where a lower number indicates less correlation and more parity. For clarity, I'll subtract the coefficient from 1 so that a higher number equals more parity.

The high value here for the NFL and the very low value for the EPL shouldn't surprise anyone, since these are two of the standard bearer leagues for greater and lesser parity respectively.  While the NFL has its share of consistently successful franchises, a look at the results of, for example, the Miami Dolphins and Green Bay Packers over the last few seasons should convince any fan that a competitive campaign is possible no matter the outcome of the previous season.  Meanwhile, the EPL has been dominated by the same handful of teams since its inception.  Another handful of recently promoted teams and perennial strugglers fight against relegation while the rest of the league jockeys for position in the middle of the table.  It's fair to say that a vast majority of EPL fans wake up on the first match-day of the season knowing that their club has no shot of winning the league.

To reinforce the point, here's a chart showing the correlation between one season's point total and the next, with some of the outlying points labeled. Note that there's no strong cluster in the points. The best fit line is practically horizontal and the R2 value is minuscule. 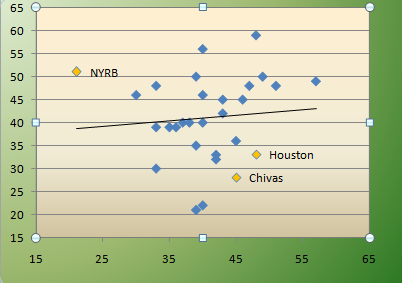 What could account for this? To some extent, I think it's the fact that even now it's a young league, with a lot of expansion teams and where teams are still finding their personalities. But I think the easy answer is that the controls that the league has put in place to enforce parity are doing their job. The salary cap, the careful apportioning of players through fifteen different kinds of drafts, and the single-entity structure have all ensured that no team can stay dramatically better than any other team for very long. If we target the NFL as having the 'right' amount of franchise parity, you can easily make the argument that MLS has too much. While it may be heartening for fans of a losing franchise to know that they might be next year's LA Galaxy, it's surely also frustrating for fans of winning franchises to know that their success is likely to be all too brief.

It will be interesting to watch whether the recent changes the league has made to relax some of the roster constraints — including increasing the number of DPs, lifting the restrictions on the number of homegrown players, and increasing the cap — will reduce the level of franchise parity over the next few seasons. Given that even a significant reduction would still likely leave the league with as much parity as the NFL, it seems like a good gamble.

(Continued in Part 2, probably next week, where I get into the other two kinds of parity)