Should the Sounders take Chris Seitz?

Share All sharing options for: Should the Sounders take Chris Seitz? 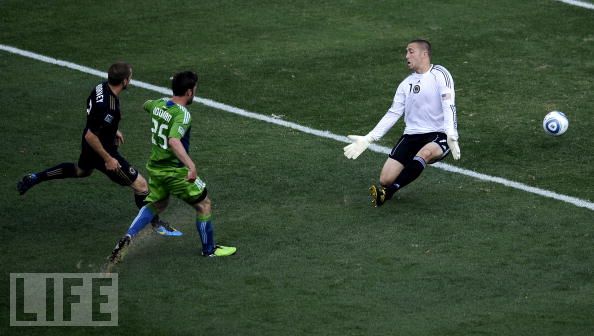 The Sounders have taken up the rights for Philly keeper Chris Seitz.

This is more than a rumor, as it's being confirmed all over the interwebs, but at this point Seattle is only available to offer him a contract offer that he likes. This means he isn't necessarily on the team or will be on the team, however, that could change by the time you read this (MLSsoccer already has him listed as a Sounder).

Jeremiah reports that Seitz made $135K last season. That's not backup keeper money. That's more Kasey Keller future first-team replacement money. It means that if indeed he does get signed, he's our long-term prospect for our number one keeper.

Allow me to show you the most viewed highlight of Chris Seitz on youtube.

Now, maybe he just needs time, as Nowak states, and the talent and potential is really there. He's been tapped up for USMNT play before, getting on the roster for the 2008 Olympic games as a backup for Brad Guzan, but never made the full step up to the big boy roster from the U-23's. Could he be someone our coaches can work with, and turn him into a starter? More importantly, can he fill the gloves of our Kasey?

One thing that makes this interesting is that Philly were looking to sign a new keeper anyways, despite the fact that Nowak is bitter about losing Seitz to the Sounders. So that means Cologne's starting keeper Mondragon will likely be headed to Philly, thus causing former Cologne keeper Markus Proll to come back on trial for his old club. I don't get it, why didn't we just sign Proll in the first place?

Also, wiki says Seitz played 2 games on loan for the Timbers. And that, oh, Tyrone got picked by Colorado.