Share All sharing options for: A Chat About Transfer Rumor Target Blaise Nkufo 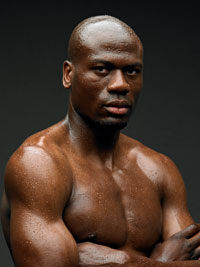 (Oh, what? Somebody has to do the hard reporting and find the good photos.)

As has been reported elsewhere, there have been transfer rumors linking Sounders with FC Twente striker Blaise Nkufo. Not an immediate thing. Most rumors have him finishing out the season in the Netherlands and showing up here afterwards.

In a nutshell: 34 (35 in May) but in his prime, Swiss international but born in what was then Zaire. According to Wikipedia (which is never wrong), he's scored 111 goals in 213 appearances for Twente since 2003. Rumored (via BigSoccer) to have a wife in Vancouver. Which is kind of close to Seattle.

I had a chat about the rumor yesterday with my buddy Chris, who writes the AS Roma page here but is also an Eredivisie fan.

Laurie: Do you watch FC Twente much?

Laurie: Nkufo has been linked to Seattle. What can you tell me?

Laurie: Which means he'd be okay in MLS
Laurie: We need a goalscorer desperately

chris: Scores a few more goals
chris: Well, a lot more goals, but you have to take into account it's the Eredivisie
chris: I kinda doubt he'd go, however.

Laurie: These rumors seem more legit than most.

chris: He's still integral to Twente - leading the Eredivisie and with a very bright future - and still plays for Switzerland. Maybe in a couple years, but soonish I'd really doubt.
chris: He's the classic point in a 4-3-3, however, should he sign.

Laurie: "Nkufo's agent said the transfer is conceivable because the striker has family in Vancouver, B.C. It's thought he will finish the season in Holland and then be available to the Sounders. "

chris: Swiss striker from Zaire with family in Vancouver. A genuine int'l man of mystery.
chris: He will be 35 in May, but I really think he'll have another year in Enschede before wrapping it up for a paycheck. And this may be posturing for that deal from Twente.

Laurie: Compare his style of play to somebody I'd know.

Laurie: Wait. You said that already. :)

chris: I did.
chris: Targetman

Laurie: I just watched the last five minutes of the Twente-W Bremen game and picked that up even though Twente was 100% defending.
Laurie: Seattle desperately need a targetman

So, in short, Chris thinks it's unlikely that he'd leave Europe yet. But stranger things have happened. And for the moment we can continue to dream of somebody who can get on the end of crosses (or follow up on goalkeeper gaffes) and actually put them in the net. Or at least score from the penalty spot.

No harm in that, right?

Videos below the jump. Get a napkin first. For the drooling.

I'm talking about the goals. What were you drooling over?